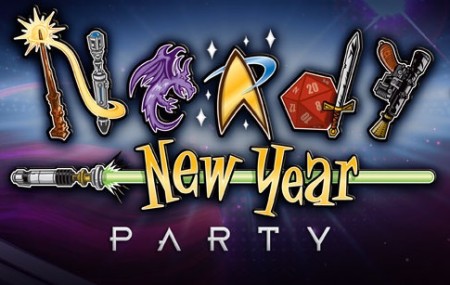 What a fantastic way to start the Con off. In the Marriott Atrium Ballroom Thursday night at 8:30PM was the Nerdy New Year Party, the official kickoff event signaling the beginning of Dragon Con.

Dr. Q was a wonderful and entertaining Master of Ceremonies. Granted, there were some technical glitches at first. Apparently, in Dragon Con fashion, our five hotels were causing a brownout all across Atlanta. This, in turn, created problems for Dragon Con. Tech Support, in their infamous and talented magical abilities to make things happen, got everything back up and running. We just needed to let Atlanta know we were here.

There were chairs to rest in and a large dance area for those to partake in dancing. There were several skilled performers.

Geekapella, from Orlando, were first up. They are Orlando’s only geeky a cappella group. This is their second year at Dragon Con. In 2015, they released Legends of the Hidden Demo, performed at conventions.

Following the CandyBox Revue were The Doubleclicks. They write nerdy, clever songs featuring cello and cat keyboard. Their first album debuted on Billboard at number two, and they have a new album available.

To fill some time while the acts were in transition, Professor Snape, our favorite Potions Master, entertained the crowd with his wit and sarcasm.

To round out the evening was the band The Cog is Dead. They bill themselves as a time-traveling steampunk trio whose music is fun, eclectic, and widely enjoyed around the world. They were so energetic and a joy to watch.

A final countdown made it official: time for Dragon Con! Let the party continue.