Michael J. Martinez has spent the past 20 years as a professional writer and journalist, including stints at The Associated Press and ABCNEWS.com. As a writer of alternative history science fiction, he is a member of the Science Fiction & Fantasy Writers of America and International Thriller Writers. His newest novel, MJ-12: Inception, will be officially released September 6, 2016 (with a debut at Dragon Con).

Daily Dragon (DD): Welcome back to Dragon Con. Thank you so much for taking time for this interview. I really do appreciate it. I know this is your third straight year at Dragon Con.

Michael J. Martinez (MM): I have been an attending professional for the past 3 years now. It is easily one of the most favorite conventions I have ever been to. I have always been a geek, but I have not really attended a lot of cons before being published. Then I published a novel, which was a wonderful act of hubris. It gave me the wonderful opportunity to be with geeks in their natural habitat. It’s been great.

DD: What do you enjoy most about Dragon Con?

MM: Wow. What don’t I enjoy? There is an immense camaraderie, not only between the people who attend, but the volunteers and the panelists too. We are all in this together. It’s a positive feedback loop. It’s a celebration of geeky joy. It’s a fantastic thing to experience. The volunteers are very nice, accessible, and helpful. They are very lovely, lovey humans. It gives me a better chance to do what I do. I have been to another unnamed convention, with ‘Comic’ in the title, and it’s very hard to break in and get to know people. That right there is what makes Dragon Con so special. Dr. Q, from the Alternate History Track has made me feel so welcomed. I actually worked with him this year to help create some panels.

I work a full-time job, so this is a time for me to see all the members of my tribe and have a great time with all of them.

DD: Your bio states that you have been a professional writer for over 20 years. How did you know you wanted to be a writer?

MM: I started as a journalist. I took one of those career tests in 10th grade to help you determine what job is best suited for you. Journalist came out at the top of the list. I did that for 15 years for the Associated Press and ABCNEWS.com. Then I got married and had a kid, and decided this is a lot of work with 60-hour weeks. To get a higher position would have meant longer days. The job became a threat of becoming all consuming. I decided I wanted to watch my daughter grow up. I went to work for a corporation for twice the pay and half the hours. Selling out was great.

I found the time to write like I wanted to. I never took a class on fiction writing, but I had the idea for the Daedalus Trilogy. I figured at best someone would like it and at worst people would think it stinks, and I would go back to other things. It didn’t stink, and I am proud of that. It’s let me do fun short stories. It let me start creating a new series. I am still in my happy-to-be-here phase.

DD: I am really looking forward to seeing the MJ-12 book.

MM: Thank you. I think it’s fun. The MJ-12 books are a departure from The Daedalus series. The Daedalus series is more swash bucking, advernturey fun in space. It allowed me to have fun as my 13-year-old self all contained in one book. MJ-12 is a more mature, a little darker, a little nastier in some places. Post World War II was difficult. Granted, we talk about the Eisenhower years and the post-war boom and that was great. But, it left so many people behind, which spurred on the Women’s Rights Movement and the Civil Rights Movement. I felt that 1948 was a great year to start. Starting in the 1940s to the mid 1950s, paranoia was running rampant. If the government did now what was done then, there would be an uproar. The Daedalus series played out well, and I think others felt the same way. As a writer, you have to keep tilting windmills. Although this is not food on the table for me, this is something I am passionate about. After the kid goes off to college, it may be something I look at doing even more. Now, I can still put out a book a year.

DD: I see that on your website that MJ-12: Inception officially comes out September 6th, but that you are debuting it at the Con.

MM: That’s true. I will be having some copies at the Missing Volume Booth at the dealer’s center and I will be autographing them. I will autograph them, or about anything else you put in front of me. I will be also carrying some around with me as giveaways. You can always tweet at me, and I will reach in to my stash and give you one. You just have to promise to love it and then pass it on.

DD: How many books do you have planned for the MJ-12 series?

MM: Night Shade Publishing has me contracted for three. The first is set in 1948. The second, which I am writing now, is set in Syria in 1949. As you know, it was a total mess. The third will be set in the early 1950s. After that, I don’t know. It will depend on how the books play out. If I am burned out, which I can’t imagine, this could play out to the Cuban Missile Crises in 1962. That would be almost a book a year. That will be a major commitment on my part, so I don’t know yet. As a writer, you always have new ideas all the time. I may take a break from a series and do a standalone. There will be peaks and valleys. We will see.

MM: I am a child of the late 70s and 80s. Star Wars, first and foremost. More so than Star Trek. You can see that in the Daedalus books. More on the fantastical side, you have Tolkien. On the science fiction side, you Arthur C. Clarke was big for me. In terms of the MJ-12, my teenage diet was a lot of Tom Clancy. Those real classics before he went multi-generation. John Le Carré is another one. Alyssa Wong is a fantastic writer. She is like “wow.” There is a lot of great stuff out there. I try not to let them influence me too much, because I do want my own style. There is no way I could be an Alyssa Wong. I wouldn’t want to be. It would be a disservice to her and to me if I tried. I really don’t have a lot of time to read, which makes this question kind of difficult to answer.

DD: What advice would you give to writers in how to develop a character’s voice?

MM: Read it out loud. How would you want that character to sound? Hear how others sound by watching movies. You are not looking for actual voice. You want something that sounds authentic. The best way is out loud.

DD: What five things would you like readers to know about you?

MM: I love beer in general and I love making beer. You can take the ingredients and make a massive about of flavors.

I once met the president of Iceland due to my wife’s job as a travel writer. When she goes out to do stuff, we get to go with.

I identify as a Vermonter, but I can see the transition as a Californian. I just got back from L.A, where my company’s main headquarters is located, and I really like it there. It a really nice place.

Star Wars over Star Trek. I like my Trek, but… Star Wars.

Dragon Con was my first major convention. I have been to smaller conventions, but there is an awesomeness with Dragon Con. They really didn’t have the energy that I was looking forward to.

DD: Where can people find you at Dragon Con?

MM: The “Alternate History Track” will be at the AmericasMart convention center, so don’t go looking for me at the Westin, unless it’s at the bar.

11:30AM—The Beginner’s Guide to Steampunk and Other Forms of Alternate History, AmericasMart Building 2, 4th floor, Room 204 I. Far more than a Steampunk 101 panel. Some steam, some punk, some other stuff. (I am likely the other stuff.)

1PM—World at War: Alternate History in the Early 20th Century, AmericasMart Building 2, 4th floor, Room 204 J. Really looking forward to this one, as we’re firmly outside steampunk and into all sorts of other cool stories. 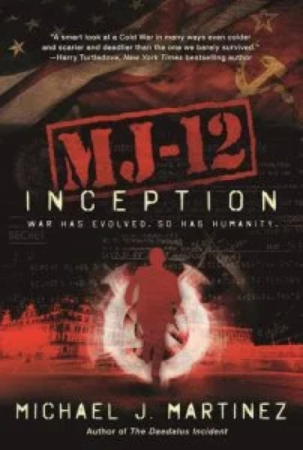 4PM—MJ-12: Inception reading, Hyatt Regency Atlanta, Edgewood room (one floor below the Artist/Comics Alley). Why, yes, I’m doing a reading! And if you’re hoping to cadge a giveaway, this is absolutely your best opportunity to do so. Just saying.

7PM—History or Alternate History, AmericasMart Building 2, 4th floor, Room 204 I. It’s a game show! Figure out whether a statement is historical fact or fiction! And you’ll win stuff! Plus, we have Cherie Priest. Eric Flint, Gail Z. Martin, S.M. Stirling, and Thomas Willeford on board. Pure awesome.

5:30PM—In the Shadows: Espionage in Alternate History, Americas Mart Building 2, 4th floor, Room 204 I. Now we’re talking! In fact, I may have suggested this very panel to Doctor Q, the Alt-History track director, earlier this year. It’s obviously relevant to my interests, and hopefully to yours as well.

8:30PM—Steampunk/Alternate History Is Here to Stay, Hyatt Regency Atlanta, Embassy room C/D (take the International Tower escalators down). Well, I didn’t think it was going anywhere, frankly, but we’ll be talking about how to make it even better.

I’m a husband, father and writer living the dream in the Garden State. I’ve spent nearly 20 years as a professional writer and journalist, including stints at The Associated Press and ABCNEWS.com. After telling other people’s stories for the bulk of my career, I’m happy that I can now be telling a few of my own creation. I’m a member of the Science Fiction & Fantasy Writers of America and International Thriller Writers.

When not being a husband, parent or writer, I enjoy beer and home brewing, cooking and eating, the outdoors and travel. If you’re curious about our travels, my wife does a far better job of describing our adventures, so check out her blog at katrinawoznicki.com.