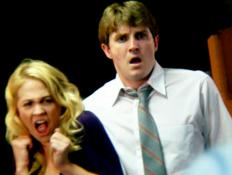 Downsized is a horror-comedy short film set in the world of corporate America. Four financial employees are called into the office for a late meeting. Turns out their inept boss has been fired for botching the big account, and now, armed with an axe, he plans to kill them off in the very cubicles where they spend their nine to fives.