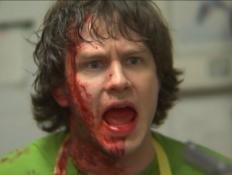 Thompson needs to find somebody to work his Saturday shift at the hardware store. But his fellow employees aren’t exactly coming to his aid, and the store is short staffed ever since his jerkwad boss Gary fired the underperforming Chuck. When the disgruntled and well-armed Chuck returns for revenge, Thompson and his callous co-worker Hannah get caught in the middle of the rampage. Gary locks himself in a storeroom while Chuck attempts to extricate the frightened manager. Once bullets start to fly, things don’t quite work out the way everybody had hoped. Or do they?