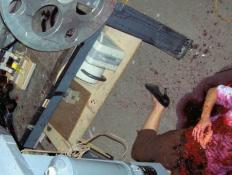 William, a disaffected, pretentious projectionist at a prestigious film festival, has high notions of cinema. When screening one terrible film after another, he’s jolted from his daze when a film is destroyed in the projector. Soon he’s forced to confront Madeline, a wannabe filmmaker with an explosive temper. After enduring a slew of verbal abuse from Madeline, an unfortunate accident renders her into a corpse and William is finally given a chance to show the audience the true meaning of cinema.