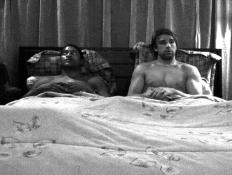 Small Talk is a comedy about a beautiful woman named Vanessa in search of a night of wild and unabashed fun. Although she is incredibly sexy, seemingly outspoken and may look like the type that would be a regular in the Hollywood scene, she was really quite opposite. After coming across two different guys, Thomas and Casey, she decides to do something she’s never done before. These men meet for the first time, lured by this vixen, into a night that they won’t soon forget.