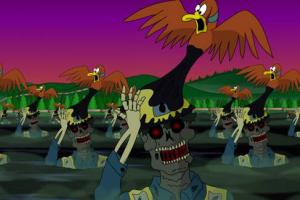 A four-part animated series following Rantdog and family and their encounter with the Zombies of the Tar Sands of Death of Doom.

Can a flock of ducks and a cute bunny dodge the grasp of the Tar-Zombies?

Can Rantdog and family have a happy holiday at Tar Sands National Park–a nature preserve as gooey as the La Brea Tar Pits, but with the added bonus of being infested with industrial-strength Zombies?

Episode 2: The Return of the Ducks of Death
A stoned duck hunter empties his shotgun on a Zombie oil field worker. The Tar Sands bubble with Tar-Zombies. Rantdog’s family plays a game of crocket with a one-legged bunny. And, Rantdog decides it’s time for a bowel movement.

Episode 3: Outhouse of a 1000 Zombies
Will Rantdog’s family be attacked by a 1000 Tar-Zombies? Will Rantdog finish taking a dump in time to be the hero and save his wife and his 2.5 kids?

Episode 4: The Begunning
Would Smash, a member of the media, watch Tar-Zombies attack innocents and do nothing to help? Why would Twitch, the CEO of Big Oil Security Service (BOSS), be pleased to hear about a Tar-Zombie attack? And, how many Tar-Zombie ducks can a drunk Rantdog hit with his camper truck?