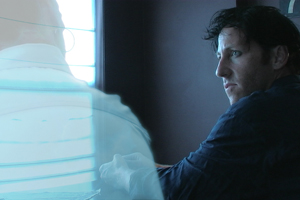 A divorced man retreats from the city when he phases in to his quiet apartment on Osiris Level, Unit 7D. One night he discovers a ghostly woman in his home – only to her, it is he who has appeared in her home.

Johcef and Phee live in a Phased Housing Project where tenants are separated by dimensional Levels. As the Levels fluctuate, Johcef is surrounded by more unwanted guests. The closest thing he has to a friend is Phee, a woman he offended the moment they met.