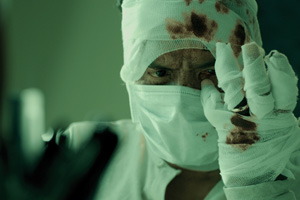 Mark is a newlywed and his bride has just passed away. He is now left with nothing, except the love for his wife which will never die. This connection is so strong that he now contracts an extreme case of sympathy sickness — and he begins to decompose, as if he had died himself. Now, with his body deteriorating, he enlists the help of his unsuspecting friend, Ron, to save not only his own life but that of his dearly departed as well.