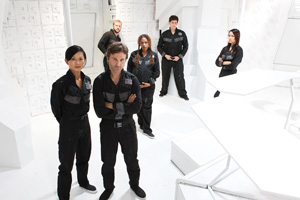 From Roddenberry Entertainment, the creators of Star Trek, comes White Room: 02B3, the story of six strangers who wake up in a room with no visible exit only to find that they are part of a bizarre experiment that could change the face of humanity.

This unique film follows Roddenberry’s tradition of breaking boundaries, shot as both a traditional movie as well as a one-of-a-kind 360 degree narrative.