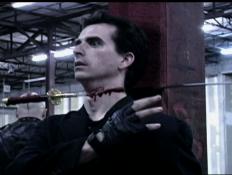 On a planet ravaged by climate change and war, a bizarre meteor shower struck the surface. It was said the crystal meteors were gates to a dimension of superhuman power. But all who sought out the mysterious crystal spheres never returned…all except one.

SuperHUMAN shatters the limitations of micro budget filmmaking with spectacular combat scenes packed to the limit with breath-taking visuals and brutal realism. Boasting award winning visual effects SuperHUMAN could be one of the most impressive independent action shorts ever made.