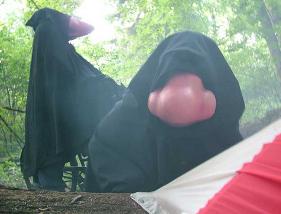 It began with the forging of the Dork-mart Credit Cards.

In the land of Lardor, in the stuffy offices of Bank Boom, the Dark Executive of Dork-mart, Lord Mauron, forged a Master Card…er, a Master Ring, to control all others. Circular credit. Endless in its power.

Ummm.  Suffice it to say that the story goes on like that for a while.  In the end, The One Ring came into the possession of a drunken Throbbit named Bobo Buggins who, upon finding it, stuck it down his trousers next to his ‘precious.’  And so the fate of Muddle-Earth came to rest in the crotch of a twit.

Sunday, Sept 3 at 1:00 AM in the Learning Center, immediately following the Parody and Fan Film shorts block.