The Dragon*Con Short Film Festival has been around as long as the multi-media Dragon*Con convention itself.  Both began in 1987.  However, there have been a lot of changes since then, including the name.  At different times the words “video,” “fan,” and “International” have all been placed in the title.  In the early years, the festival was just a minor extra event focusing on films that would interest a Sci-Fi fan.  The short movies shown were made by fans, not those who considered themselves filmmakers (in general).  Over time, the Festival has became larger and more important to Dragon*Con.  It has also departed from its fan-film roots. 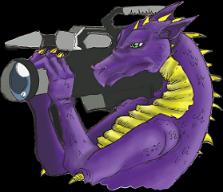 While the Short Film Festival (perhaps I should call it competition) grew, independent feature films were shown as part of the larger convention.  Additionally, panels on filmmaking, delivered by well known celebrities (and some skilled unknowns) were growing in number each year.  These panels covered topics such as FX, make-up, costuming, directing low budget films, and selling a movie.  However, there was no regularity to these panels: some years would have many, some years only a few.

In 2002, the now titled Dragon*Con Independent Short Film Festival stepped out from Dragon*Con’s shadow.  Still a part of Dragon*Con, it was time for the Fest to become important in its own right.  As such, advertisements began appearing across the country in film magazines and the Fest began taking submissions through www.Withoutabox.com.  It was now focused on talented filmmakers and the very best independent films.

In 2004, filmmaking panels, independent feature-length film screenings, and non-competition short film screenings were grouped together under the title The Independent Film Track.  In this way, it was certain that every hour of the day would have something of interest for independent filmmakers (or just film lovers).  The director of the Film Festival & the director of the Film Track worked closely together though the two areas were officially separate.

For 2005, the Festival and Track have been combined under the title Dragon*Con Independent Film Festival.   The term Film Track will still be used from time to time as track is a common term at Sci-Fi conventions, just as the old name for the short film competition will sometimes be used.  What’s in a name?

Over the years, we had many incredible films. Check out our titles by year using the navigation on the left.  As for speakers, the list goes on and on.  To list a few:

Click on a year to read about the films for that year: