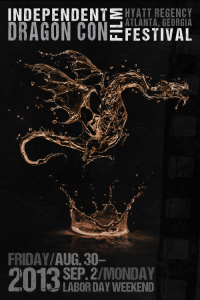 The annual Dragon Con Independent Short Film Festival returns for another exciting year with the very finest of independent short films of the fantastic. We look for intelligent, emotional, and skillfully made films, but above all else, we look for those that are entertaining. After a long and brutal selection process, we’ve found the best of the best, and we’ve got them for you.

You’ll see a man travel in time to try to save his true love while another man travels in time to tell himself to cheat on his girlfriend. You’ll follow a witchhunter as he confronts an evil witch while a different witch deals with poor coffee delivery.  You will watch frightening zombies chasing the only food left in a secret laboratory, while far less frightening zombies are helped to get their legal rights.

There are films from Germany, Spain, Belgium, Iceland, France, Italy, Poland, South Korea, and Israel, plus most of the English speaking world.

The shorts will screen in blocks built around a theme.  There will be blocks of fantasy, comedy, twisted humor, thrillers, musicals, superheroes, horror, science fiction, and animation. We have an incredible slate of documentaries. Late night is the time for features with a Korean thriller, zombies, and college horror.

The shorts, and a few features, will be shown over the 4 days of Dragon Con.  Most screenings will be in the Hyatt Learning Center.