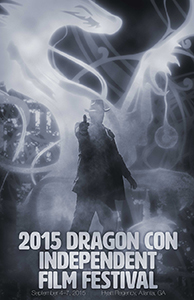 The Dragon Con Independent Short Film Festival is proud to bring you, once again, the very finest in short films of the fantastic. We look for films that display skill, that have meaning and invoke emotion, but above all, we look for films that are entertaining. The selection process is exhausting, cutting great films until we’ve found the best of the best. And now we’re ready to show them to you.

You’ll see a man trying to escape an inescapable prison, and a woman trying to escape a mob of hungry zombies. You’ll follow a demon samurai’s quest to save a princess, and an assassins quest for a better paying job.  You’ll witness bears discovering fire and a child discovering secret fairy knowledge. You’ll view a breathtaking airship pursuit and a breathless ghost pursuit.

There are films from Spain, Switzerland, France, Iran, Japan, and Israel, plus most of the English speaking world.

The shorts will screen in blocks built around a theme.  There will be blocks of fantasy, science fiction, horror, comedy, superheroes, steampunk, and animation. Night is the time for features with a Superhero comedy (with Catherine Tate) and a action/comedy fantasy (with James Marsters).

The shorts—and a few features—will be shown over the 4 days of Dragon Con.  Most screenings will be in the Hyatt Learning Center.  Check the app or your pocket program for screening times.

The films are placed into genre categories for judging purposes.  An award is given for the best film in each category.  For 2015 the genres include: fantasy, science fiction, horror, horror comedy, dark comedy, comedy, steampunk, animated comedy, animated fantasy, animated musical film, animated science fiction, and feature.  Our judges will select three finalists from each category, and choose one of those to award 1st prize.  We also present two Best of Fest awards, one for live-action short and one for animated short, chosen from the category winners. The wining films will be announced in a ceremony on Monday, September 7nd, at 1:00 pm in the Hyatt Regency V ballroom.