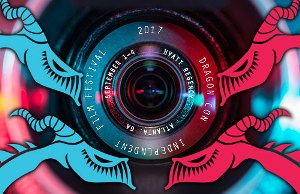 We’re back, merging geek with art in the annual Dragon Con Independent Short Film Festival. Our mission is to present the finest films of the fantastic. We search for interesting, skillfully made, beautiful, emotional, and entertaining films. Cutting our list down to the best of the best is painful, but it leaves a collection of great films.

Do you like science fiction? Well, we’ve got multiple deep-space missions, hacked brains, and robot wives. How about comedy? We have funny assassins and mad scientists. Are fan films your thing? We have a new look at Batman, Harley meeting some goons, the training of both Sith and Jedi, and even Femme Khan! What about horror? We’ve got it all from the gleeful to the cruel. We’ve got psychos, zombies, demons, monsters, The Bride, Lovecraftian horrors, ghosts, and puppets…gory, gory puppets.

As for animation, we have incredible new works or every kind: 3D, cell, “erasure,” and stop-motion animation. You’ll see pure comedies, satires, dramas, and a lot of fantasy and science fiction.

There are films from Germany, Spain, South Korea, China, Italy, Norway, Japan, and Turkey, plus most of the English speaking world. We have a large batch of home-grown Georgia films.

The shorts will screen in blocks built around a theme: fantasy, science fiction (3 blocks), horror (3 blocks including one focusing on Georgia horror films), comedy, dark comedy, suspense, monsters, action, fan films, and animation. And nothing says we couldn’t slip in an apocalyptic comedy feature, so we did.

The films will be shown over the 4 days of Dragon Con. All films will screen in the Hyatt Learning Center, with our shortest shorts repeated in a ballrooms to allow you greater access. Check the app or your pocket program for screening times.

Awards & Judging: The films are placed into genre categories for judging purposes. An award is given for the best film in each category. For 2017 the genres include: fantasy, science fiction, horror, horror comedy, thriller, comedy, fan film, animated comedy, animated fantasy and science fiction, and animated drama. Our judges will select three finalists from each category, and choose one of those to award 1st prize. We also present two Best of Fest awards, one for live-action short and one for animated short, chosen from the category winners. The wining films will be announced in a ceremony on Monday, September 4th, at 1:00 pm in the Hyatt Regency V ballroom.