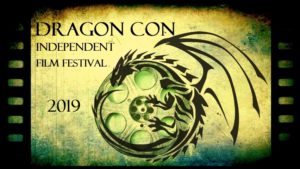 Welcome to the annual Dragon Con Independent Short Film Festival, where fandom meets art. We seek out the finest independent short films of the fantastic, ones that are smart, beautiful, evocative, and entertaining. And we’ve gathered a great collection for you.

You’ll encounter a lonely demon, desperate astronauts, violent loan sharks, killer robots, a vampire with a problem, and an artisanal lightsaber maker. We’ll be bringing you along as a druid tries to make a living in the gig economy, a woman attempts to discover why her wife has become a chicken, and an American ninja escapes from North Korea.

How about films based on the works of Stephen King and Terry Pratchet? We’ve got those. We’ve also got anime, social commentary films, and a whole lot more. There are films from Argentina, China, Finland, Greece, Iran, Israel, Italy, Japan, The Netherlands, and Spain, as well as most of the English speaking world.

The shorts will screen in blocks built around a theme. You’ll find blocks for comedy, fantasy, science fiction, fan films & parodies, action, and animation. And nighttime is terror-time as we bring out our scary stories.

The films will be shown over the 4 days of Dragon Con in the Hyatt Learning Center. Check the app or your pocket program for screening times.

The films are placed into genre categories for judging purposes. An award is given for the best film in each category. For 2019 the genres include: Action, Fantasy, Science Fiction, Horror, Horror Comedy, Comedy, Dark Comedy, Fan Film & Parody, and Animation. Our judges will select three finalists from each category, and choose one of those to award 1st prize. We also present two Best of Fest awards, one for live-action short and one for animated short, chosen from the category winners. The wining films will be announced in a ceremony on Monday, September 2nd, at 1:00 pm.