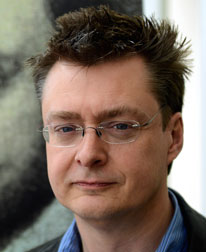 Author A. J. Hartley wears several different hats. In addition to writing various types of fiction, he’s the Russell Robinson Distinguished Professor of Shakespeare Studies in the theater department of the University of North Carolina at Charlotte. He’s also affiliated with the English department there. He was editor of the performance journal Shakespeare Bulletin for a decade and served as Resident Dramaturg of the Georgia Shakespeare Festival.

With mystery author David Hewson, Hartley has co-authored novelizations of two of Shakespeare’s plays, Macbeth and Hamlet. Both have been made into audiobooks.

The audiobook of Hamlet: Prince of Denmark was designated the Audible’s 2014 Book of the Year and was nominated in the Original Works and Solo Narration (Male) categories of the 2015 Audie Awards from the Audio Publishers Association.

The Daily Dragon sat down with Hartley to find out about the audiobooks and his upcoming projects.

Daily Dragon (DD): Since the audiobooks come from the novelizations, let’s start with those. How did you and David Hewson approach the plays in creating your novelizations?

A. J. Hartley (AJH): We spent a lot of time talking about the aspects of the plays which interested us the most and about some of the most intriguing critical and theatrical approaches to the play in the past and then tried to identify the angles of approach we wanted to take. Most importantly, we wanted a handle on the material that we thought would draw on its essential nature while making it exciting and accessible for a contemporary audience. We thought of it like a theatre company approaching a production and looking to find ways to make the material fresh, even surprising.

DD: What led you to try audiobooks?

AJH: I grew up listening to radio drama and have always found the medium interesting—a nice way to get an actual book as mediated by a skilled actor or cast. As a theatre person and a novelist, audio books are an appealing combination of the literary and the performative.

DD: What’s the process of creating an audiobook from a novel?

AJH: It’s not that different from the process of readying a book for print, though the editing is a little different because you want to adjust the text for what an actor is going to do. For instance, since the performer will use different voices for different characters, you want to keep dialogue tags to a minimum or they sound redundant or clumsy. Likewise, it might be better, instead of writing “he whispered,” to drop the phrase entirely and add a stage direction to the actor (whispered).

AJH: Selection of the performer falls to the production company. They asked us for suggestions and ran selections by us, but it’s all complicated by scheduling, availability, budget, and so forth, so we tend to leave them to it.

DD: Did you run into any surprises or unexpected problems producing the audiobooks?

DD: What have you found to be the ups and downs of collaboration?

AJH: When you trust the person you are working with, it really does reduce the workload. We divided up the project according to what parts especially interested us and then read each other’s stuff. It pushes you to work hard—doubly so when you are in different parts of the world and tend to wake up to 12 pages in your inbox. The biggest challenge is making sure that the voice is consistent throughout, and from time to time you disagree and have to hash things out, but it went very smoothly for us.

DD: Your website says the award-winning Darwen Arkwright series is finished and that you’re launching two new series. What are they?

AJH: It’s actually three series. Two YA, one adult. In June of next year the first of my new series for Tor will release. It’s called Steeplejack, and is a YA fantasy mystery/thriller set in a place somewhat resembling a Victorian South Africa. The other two series are art of my collaboration with Tom DeLonge (lead singer of Blink 182/Angels and Airwaves) and will involve various media components, including original music. One is called Cathedrals of Glass, and is YA sci-fi series I’m describing as Lord of the Flies meets Alien, but the first one to come out (March 2016) is being kept very quiet. I’ll just say that it’s got both a historical and sci-fi component and is going to get a lot of attention.

DD: You recently edited the book Shakespeare on the University Stage for Cambridge University Press. Do you have to switch mental gears to go from academic work to fiction to audiobook production?

AJH: Yes, very much so. They are utterly different kinds of writing, and they have to be kept separate. If they bleed into each other, the results are terrible. I therefore try to give each project a significant block of time—months—while I work on the first drafts. I can juggle several things when I’m at the editing and polishing stage, but when a book is at the initial writing stage, I need to give it my full attention.

DD: What do you find most enjoyable and most challenging about attending conventions?

AJH: The most fun thing about conventions is the general atmosphere of being in among “my people,” by which I mean those who share my passion not just for fantasy and sci-fi but for thought and imagination generally. Plus, where else can I just start randomly talking about Firefly and everyone knows what I’m going on about? And I love to people watch. I’m a great admirer of cool costumes 🙂 Downsides? Elevators…

DD: Do you have any advice for writers who’re considering a collaboration?

AJH: Collaboration all depends on the chemistry between the writers. David Hewson and I are both fairly old hands at writing, and we quickly got on the same page as to what we wanted and how we wanted to do it. In truth, we didn’t know each other that well when we set out, but that proved not to be a bad thing because we could be professional and therefore honest without worrying about hurting each other’s feelings or feeling awkward next time we went on holiday together or sat down with each other’s families. The Shakespeare books were pretty much our whole relationship, and we didn’t really socialize before or since. We worked well together, but I wonder if that was partly because we were always entirely focused on the project.

I’m wary of working closely with someone I already have a close relationship with. There’s too much which could go wrong and spill into other areas of our lives. Having said that, my collaboration with Tom DeLonge was a real leap of faith that has proved thoroughly satisfying and productive. We hit it off from the outset. But part of why we work well together (as with David), is that our backgrounds and skill sets are so different. We don’t get in each other’s way because we’re each bringing something different to the project. I’ve been lucky that in both collaborations, I’ve been paired with people I got on well with who were really passionate and hard working.

Lastly, I’d say that it helps to be a theatre person. Staging a play is a massive collaboration between writer, actors, director, designers, etc. No one “owns” the show entirely. That’s a healthy way to approach collaboration: takes some of the ego out of the process. Writers who argue about why they shouldn’t change stuff in response to what other people say should not try to collaborate. You need to believe that you are serving the work, not the other way round.

DD: Congratulations on the recognition your books and audiobooks have achieved, and thanks for your time.