By 8:30 on Saturday morning, parade-goers were lining Peachtree Street. Mike, Kevin, and Katie from the Aliens Legacy Colonial Marines were getting coffee at the Westin Starbucks. When asked why they chose to participate, Mike said, “It’s more fun to participate.” As Kevin agreed, Mike added, “We have a tradition to keep up. The Colonial Marines have led the parade since 2013.” Their color guard, many of them veterans, comes from different countries and wear the dress uniforms from the movie Aliens.

Behind the Marriott, the parade shuttle was picking up participants and heading to the assembly point, a parking deck farther up Peachtree Street. Ginger, dressed as Ty Lee from Avatar, the Last Airbender, said this was her third year in the parade, with one prior year as Belle from Beauty & the Beast and one as Ty Lee. She enjoys being Ty Lee because “she’s an acrobat, so I get to do handstands and cartwheels, which is a big crowd pleaser.”

On the same shuttle were Judge Dredd, several Netherworld denizens, a couple of Jedi, and a Starfleet officer.

As the shuttles disgorged their passengers, Kris, Cat, and Terese from the parade crew and Andrew and Brennen from Security were on hand to direct them to their units.

Dave, wearing the red of a Star Wars Imperial Guard, Kirkanos, said, “I just love walking in the parade. I’m retired Air Force, so I walk in parades every chance I get. I love showing off the costumes.” This was his first year in the Dragon Con parade. His wife, who was on the street to watch, planned to take a photo to show their kids that Daddy was in the parade.

Robert wore the red command uniform from Star Trek: The Next Generation. He said he marches because “it’s kind of exciting.” He likes seeing all the people and waving at the kids. “It’s fun, though I hate missing the parade. I try to alternate [marching or not]. This is my third time marching.”

Farther up the parking deck ramp were two men, Elton and Chuck, in old-fashioned US Navy uniforms with parrots on their shoulders. They were cosplaying G.I. Joe Shipwreck, a 1980s US Navy sailor. They march in the parade “for the enjoyment of it.” Both men served in the US Navy. Chuck said his wife calls him an attention hound anyway, so if he’s going to cosplay, he might as well get out there among the people who don’t have con passes.

Brian, a member of the 501st Stormtrooper Legion, joined the parade because he likes to see the kids wave. It takes him back to when he was small. He joined the 501st because he loves Star Wars and the organization does so much to bring joy to kids, “even big kids.”

According to parade director Jan Price, about 3,300 participants were expected to walk the route. They’ll be outnumbered by spectators. Some estimates place 2014 attendance at over 100,000 people. 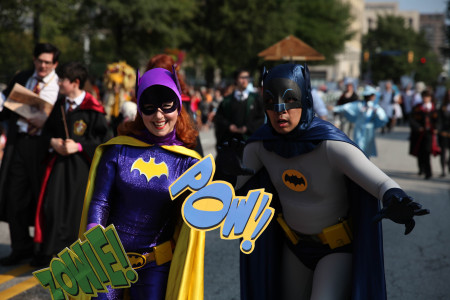 Anticipation built as 10 AM approached. “The parade has started,” a volunteer said, letting everyone know the first units had stepped off down Peachtree. “It’s on its way.”

In front of the Hyatt, Daniel, Danielle, and Quinton, students from Young Harris College, awaited the parade’s start. Daniel was the 11th Doctor, Danielle wore steampunk, and Quinton wore white street fighter garb. They were at the con because Danielle, who loves it, dragged Daniel, her boyfriend. “She’s my girlfriend, so I have to listen to her,” Daniel said.

Quinton, Daniel’s roommate—and best friend, according to Daniel—said he had to come with his roommate.

George and Kelly had their two daughters with them. Kara was dressed as Snow White and Khenvie as Rapunzel. This was Kara’s first Dragon Con and Khenvie’s fourth. “The girls love the parade,” their mom said.

Near the parade’s end in front of the Marriott, David and Paige waited. David has come for the past four years, but this is Paige’s first Dragon Con. He usually plays Pathfinder on Saturday morning, but this year, he planned to take pictures to show everyone at work. “Everyone’s Facebook is going to explode,” he said.

An unmarked police car with blue lights flashing received cheers, although it did not actually appear to be part of the parade.

The parade started with author and bagpiper Janny Wurts marching ahead of the Dragon Con banner, which was carried by Parade Team members escorted by two dragonriders. Then came Grand Marshal Nichelle Nichols, making the Vulcan salute as she waved to the cheering crowd. After Nichols came the color guard and the Colonial Marines group, who chanted with gusto. 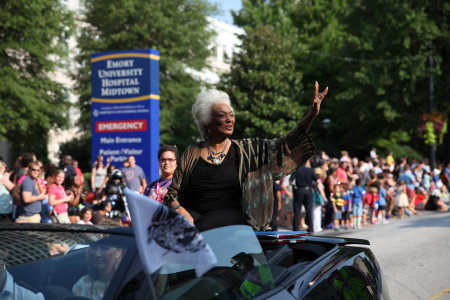 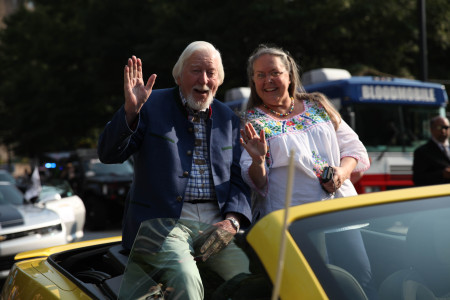 Mounted knights in armor from Medieval Times, a parade sponsor, urged their horses to prance. With them came comrades in period costumes. The Star Trek group marching behind them provided a sharp contrast of eras. One member of the Trek group bore an uncanny resemblance to the late James Doohan (aka Scotty). A Klingon stepped out of formation to spar with a young boy dressed as Nightwing.

The Lord of the Rings contingent included elves, dwarves (led by Thorin Oakenshield), and Gandalf himself. This year the section marched in memory of longtime Dragon Con attendee, volunteer, and LoTR fan Melissa Kern. Kern, the founder of the LoTR parade group, succumbed to ALS earlier this year after a long and well-fought battle against the disease.

As always, the Dragon Con parade featured a wide range of fandoms and characters. Everything from a pink Darth Vader to Sharknado to Game of Thrones favorites such as Robert Baratheon and King Geoffrey walked past. One group of marchers knocked each other down with padded swords. The two women in the group were the last to fall, their battle ending in a draw. 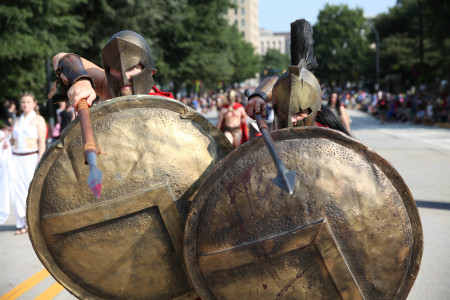 Carrying a 300 banner, the cadre of Spartans marched in force behind the Seed & Feed Marching Abominable band. Three versions of the Ghostbusters’ car, Ecto-1, followed, surrounded by uniformed Ghostbusters who encouraged crowd participation by shouting, “Who you gonna call?”

Hiccup and Toothless delighted the children along the way. After them came the pirates, complete with a pirate ship bristling with cannons, and the Pastafarians. The Pastafarians’ signs read, “May the Sauce be With You,” “Meat Your Maker,” and “Praise the Noodle One.” 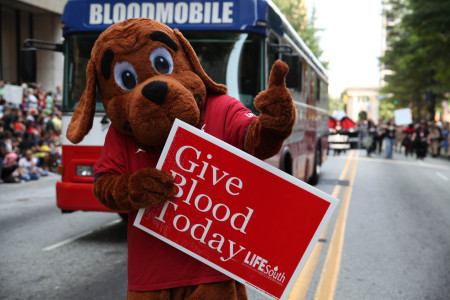 Parade sponsor Netherworld had aliens, demons, a velociraptor, and other frightening monsters. The Bloodmobile from LifeSouth, Dragon Con’s blood drive partner, followed Netherworld. Don’t forget to stop by the Galleria level in the Hilton and donate!

The heroes and villains of Star Wars walked peaceably together, with bounty hunters strolling beside Chewie, Han, and Leia. Luke walked by in his Dagobah clothes. On his back, he carried a Yoda—hair in pigtails. As usual, the 501st were a big part of the Star Wars group, and the Kilted Troopers provided bagpipe music for the marchers. One trooper carried a cardboard sign that said an Ewok stole his speeder and he needed money.

The last group in the parade, Futurama Santa, scowled out at the dispersing crowd.

Authors of the article