Steve Whitmire and Carroll Spinney, better recognized as Kermit the Frog and Big Bird, delighted a captivated audience Sunday, 11:30AM, in Hyatt Centennial II-III for their only Dragon Con panel together, “Carroll & Steve: Early Days of Sesame Street.” They recounted moments from their storied careers, from appearing on The Muppet Show and Sesame Street to working with the incomparable and legendary (and still very missed) Jim Henson. 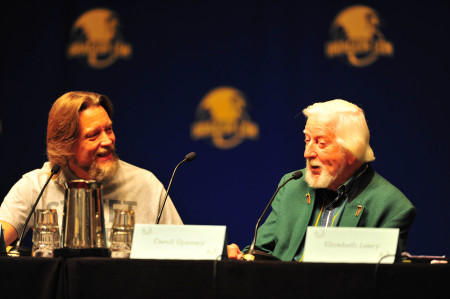 The old friends had a jocular manner and bantered easily, making it feel as if you were eavesdropping on a private conversation. They repeatedly expressed admiration for Henson, who they described as incredibly kind and kind-hearted—a man they never saw angry. He was also a one-of-a-kind performer, writer, and director. From the beginning (which was a couple of Wilkins Coffee commercials that can be found on YouTube), Henson’s puppets were unique.

They also talked candidly about the great (and it would seem pretty-funny-in-person) Frank Oz, who performs the Muppets Miss Piggy, Fozzie Bear, and Animal, as well as the voice of Yoda in the Star Wars franchise.

Whitmire and Spinney met at an Atlanta puppet festival, where Whitmire performed a character named Otis, who sang a song called “I love Onions.” Spinney knew that Henson needed a puppeteer to join The Muppet Show and convinced Whitmire to sign up. It didn’t take much, as Whitmire—just out of high school—loved the Muppets and was already doing a similar style of performance.

As a kid, Whitmire recorded Sesame Street and restaged parts from memory for his friends. But, it was the Rowlf the Dog on the Jimmy Dean Show who inspired him to go into puppetry. Rowlf was the first star Muppet, even ahead of Kermit, and also motivated Spinney to become a puppeteer.

Spinney, though, originally wanted to be an animator for Disney. He interviewed there in 1957 and was hired but was told not to show up for two years (back in the day Disney didn’t hire new talent while in the middle of a production—in this case Sleeping Beauty). Spinney turned down the job because the pay—$57 per week for the first two years—was low. Walt Disney himself walked into the room as he was declining the offer. Still, he fulfilled his lifelong dream of meeting Disney.

The pay wasn’t much better with Henson, who teased Spinney, “We have a tradition. You won’t like it,” about the low pay.

Whitmire and Spinney agreed that the art of performing as a Muppet is perfected with experience and that they both learned as they went.

“I was surprised how much I didn’t know,” Whitmire remembered about joining the cast of The Muppets at the height of its popularity, which was a great time to study “muppeteering.”

“I felt I was not deserving to be with Jim and Frank [Oz],” Spinney said. He even tried to quit early on when he kept missing the first note of a song. He thought he was that unworthy.

Spinney recounted how he met Henson. It was at a performance Spinney had painstakingly staged but that went terribly awry thanks to über-bright lights. He pulled it together and was applauded for his effort. Then, he heard a soft voice behind him say (Spinney does a great Kermit the Frog-esque imitation), “I liked what you were trying to do.” Henson explained that he was no stranger to disaster himself.

At the time, Sesame Street was being piloted and the original creators decided it needed the Muppets. So, they contacted Henson, who brought Spinney on board.

When Henson died, both Whitmire and Spinney took over characters he puppeteered. Finessing the voices took time, and the two talked about the process of getting them right. Before Henson died, he had suggested that the puppeteers shadow one another to learn each other’s parts so that the Muppets could continue “even in death.”

“I’m surprised we went on,” Whitmire said of moving forward when they finally had to enact the plan. “The characters come from the people who perform them,” he stressed. Fortunately, he had footage of Henson performing Kermit the Frog and the faces Henson made while animated. That video “clued me in more than anything else” he said, and helped him understand where Kermit came from. “Make the faces [the Muppet] makes,” he continued. “That’s the process.” The face should mirror the emotion.

Most audience members who asked questions expressed their gratitude to Spinney and Whitmire for inspiring them as children.

Whitmire loved performing on Fraggle Rock, but when asked, said he is not involved in any attempt to bring the show to the big screen, which has been a rumor for years.

When asked about joint projects, they pointed out that it is very rare for the franchises—The Muppets and Sesame Street—to cross. Big Bird has only appeared on The Muppets once, but Whitmire and Spinney worked together on A Muppet Family Christmas; Whitmire’s Rizzo the Rat interacted with Spinney’s Oscar the Grouch. Spinney called it the “most enjoyable production I got to work won.”

For Spinney, he most relished working with Danny DeVito and Waylon Jennings, the original outlaw of country music. They spent two days in a truck filming for Sesame Street Presents: Follow that Bird, and Jennings appeared on Sesame Street three times. They became lifelong friends, even spending a Christmas together.

“He was just a soul man,” Spinney said of his late friend.

Of course, the burning question of the day was asked: what’s up with this Denise/Kermit/Piggy situation?

“As performers, [me and Frank Oz] were running out of things to do,” Whitmire explained. Back when Henson was still alive—more than 25 years ago—they were bored with the Kermit-and-Piggy relationship and discussed doing something new. It finally seemed appropriate.

They are going all-out and playing it like its real life. “It’s just insane and fun the way it’s been played on the Internet,” Whitmire said. “[Denise] is still a pig.”

And—wait for it—Kermit may even date others!

Whitmire and Spinney were as warm as you’d imagine men who bring endless joy to children (and adults who used to be children—so everyone in the world) would be. Better people couldn’t bring America’s most treasured Muppets to life.

Kelly McCorkendale is a dog-lover, avid quilter, and occasional creative writer who loves the color orange and boycotts cable (except Game of Thrones because, well, what if winter is coming!?). After college, she realized poets weren’t in demand, so she shipped off to Madagascar with Peace Corps. Since then, she’s found a niche working on health systems in Africa but has a long-list of life tasks yet to be fulfilled--such as perform blackmail, learn a trade, and become a competitive eater. She has an MA in International Education, believes rice is the elixir of life, and, in high school, won the best supporting actress honor for the state of Missouri. She may also recite poetry (her first love) when imbibing in alcohol.