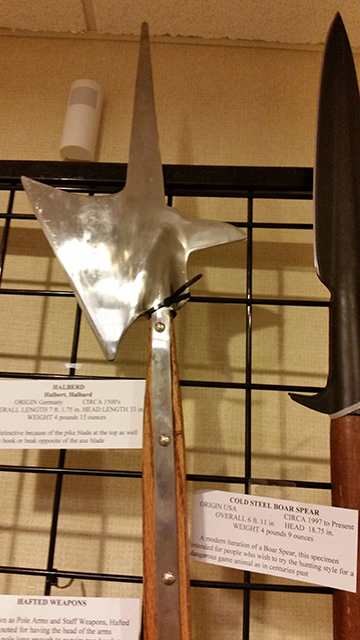 The Docent of the Palmetto Knights added a panel to their repertoire on “Spears: The Thrown Point” Saturday evening, covering a variety of weapons used for hunting and warfare since the dawn of humanity. The Knights considered the origin of the spear in fire-hardened sticks used by hunters and by peasant-conscripted troops. They displayed and explained the purpose and use of a variety of hafted weapons: the hunting or boar spear, the javelin, and the Roman pilum, and medieval lances, halberds, and poll- (as in head) or pole-axes.

The advantages of the armor-piercing spike on many of the weapons (think giant helmet “can-opener”) and of the different phalanx-type spear and shield formations used in ancient and medieval combat strategies prompted a lively confab. The Knights remarked that the modern successor to the spear, the bayonet, preserves the legacy of this distinguished line of weaponry in modern battles.

The display of spears and other hafted weapons may be viewed in the Armory (Hyatt Kennesaw), complete with accompanying information cards for a self-guided tour. Palmetto Knights are available to answer your specific questions. Just remember not to touch. Spears be sharp!