Stand on the ground and look up at a building-sized rocket, looming above you, dominating your vision. That is a chemical rocket, and 90% of the mass of that vehicle is fuel. Most of the fuel is used to achieve escape velocity from the Earth’s gravity. Laetitia Garriott de Cayeux, COO of Escape Dynamics, has a different vision for launching payloads into space. Her company has already started on a path to use microwaves to power their rockets from the ground. 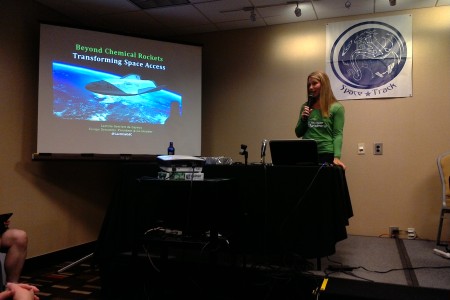 In an impressive presentation, Garriott laid out their program during the “Beyond Chemical Rockets” panel for the next six years. The plan includes the construction of a fleet of ships and ground infrastructure to launch payloads into space faster and less expensively than current constructs. The ship uses a heat exchanger on the belly of the craft to receive microwaves from the gyrotrons on the ground to a ceramic matrix of composite tiles. The heat exchanger then uses liquid hydrogen for propulsion. It’s a brilliant alternative to setting men and women atop hundreds of thousands of gallons of combustible fuel. The microwaves are generated from the existing electric grid infrastructure and renewable energy sources like windmills and stored for the high powered DC required to get the ship off the ground.

The timeline for the project shows them fully operational just after the beginning of the next decade:

The applications of this program are pretty limitless—for example, a flight to Australia from the United States could take as little as a couple of hours. This will revolutionize the shipping industry as well as transportation if they can perfect the shielding between the microwaves and the ship’s cargo.