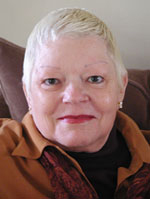 Chelsea Quinn Yarbro, a veteran author of over 90 books, mesmerized the students and alumni of Jody Lynn Nye’s Writer’s Intensive Workshop on Friday (in spite of noted astrological challenges to communication). Over the last 48 years, Yarbro has written 28 series in different genres. She is now working on her 95th book and shows no signs of slowing down.

Responding to questions from her keen audience, Yarbro revealed the genesis of her Saint-Germain vampire series: the claims made by an actual person to have lived at different times and places in history. Yarbro explained that although each book in a series must stand on its own, the series itself should have its own story arc that keeps moving in the same direction while the characters work out more immediate issues in each novel or story. In this context, Yarbro discussed one of her most recent foray, the Chesterton Holte series. Beginning with Haunting Investigations, the series is initially set in 1924 and features old-fashioned detecting. The series arc concerns a woman reporter from the upper class with each book addressing a different crime to be solved.

Yarbro advised us to learn as much as possible about writing and publishing. She also suggested keeping extensive notes of what each of your characters knows because your readers will do so and catch you on any inconsistencies. She believes that all characters have memories of what happened to them before and that you should follow your character’s lead or the character will become wooden.

In response to questions concerning research, Yarbro commented that you can never be totally on point, as history favors the literate; you have to triangulate to get the rest. She recommended reading contemporary diaries and letters and to look for gossip to uncover details and slang that you cannot find anywhere else. She makes notes in books and noted that the biggest challenges lay not in what historical persons did, but in what they thought they were doing. She gave the Crusades as an example of a genocidal war which the participants thought was a God-given duty. Wearing chainmail in the desert made perfect sense to them. She also described an apothecary who went on the Third Crusade. He learned how to treat injuries from a local herb woman, including packing wounds with moldy bread. The man was then burned at the stake for his successes. Both Roman and Arab medicine were to be eschewed as either pagan or ungodly. Witchcraft was also a crime subject to execution.

Yarbro described a favorite, alternative research technique. Find two grad students, take them to lunch, ask them questions, and let them talk. If a conflict arises, follow-up with research. And the lunch is a tax deduction, so be sure to keep receipts.

In response to a query on outlining a series arc, Yarbro suggested following what the main character continues to pursue when immediate problems are solved. She admitted that when she runs into problems, she swears at the cat and leaves a trail of tea cups throughout her house, noting that there is nothing in human speech quite like a cat’s hiss. Even if a character dies, you have to resolve their story. She advised us to let the characters tell the story. You must do what the characters want. If one character won’t tell you, ask another one.

Focusing on her most recent series, Yarbro said that she had previously avoided ghost stories. Ghosts are non-corporeal, not tangible. So the question became how to write them when there is no physicality; how do you make that believable? She solved the problem by making incorporeality an aspect of the character who had no body. He is an energetic entity who can make lights blink or phone static but otherwise cannot affect physical change. Animals can see Chesterton Holte. The cat (in the series) is furious because the ghost Holte is someone that can be seen but not grabbed.

In response to whether she kept a list of details for each book, Yarbro responded that she does keep a list of who knows what and who doesn’t and when each character learns each fact. The list does not have to be very coherent as long as it helps you to keep track. She stated that she keeps such a bible for both books and series and cautioned that if you do not know something that is needed, find someone who does and learn from them.

Yarbro shared anecdotes from her years working with editors and copy editors. With regard to critique groups, she suggested that new writers not attend them until they have learned their own voice. She did suggest using readers to find out where a manuscript may be unclear and to pay special attention when all readers were in agreement. She has found that musicians make excellent readers; they appreciate the rhythm of prose and are good on locating echo words (unintentional, unusual word choice).

Yarbro related that she has written for a living since 1970 and that when she goes to work, writing is a job. She described her daily schedule as one hour of e-stuff, then story for a couple of hours, followed by lunch and continuing work until late afternoon. She only works at night as she approaches the end of a story or novel. She advised us to stop writing when you become tired, that you will lose zing if you are too tired and, even worse, the entire next day.

She revealed that her one saint is William Shakespeare and advised that if you are going to steal, steal from the best, either Shakespeare or Aeschylus. She talked about her collaboration with Bill Fawcett on the Mycroft Holmes books and her recent experiences as a playwright. She stated that she jumps genres so that she and her characters do not get bored, stressing that characters are the story; go with the character and make a point of listening to the characters. Yarbo said that whenever her brain does some kind of subconscious thing, she follows what the characters want to happen. Take pride in those moments, you have done it right. Let the characters run your life; that’s their job.