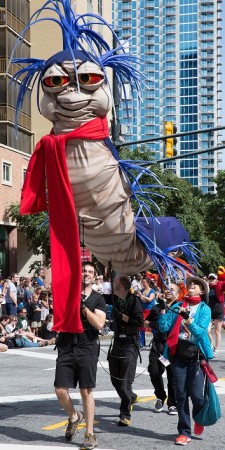 By 9AM Saturday, Peachtree Street was lined four-deep with people awaiting the 10AM parade. A quick survey of the crowd revealed that not everyone in costume was actually marching. In the block between Peachtree Center and the Hard Rock Café, fans representing the Joker, Harley Quinn, Devo, Wonder Woman, Batgirl, Doctor Who, the Blue Ranger and Green Ranger, and various princesses stood along the street. One of the smallest fans, a child dressed as the master chief from Halo, was also one of the least fidgety.

Among those waiting for the action to start were Jonathan from Atlanta and his family. This was their first Dragon Con parade. They had been interested in the con for a while but now felt that their children, ages 7 and 9, were old enough to handle the lengthy event.

A little farther down the street stood Shelly from Johns Creek, Georgia, who’d come to the con and the parade for the first time because the parade was on her sister’s bucket list. “She was, like, ‘we’re going,’” Shelly reported, “and I said okay.”

People broke the monotony of waiting by chatting with their neighbors and applauding the Atlanta Police Department units that rolled up Peachtree with lights flashing. At 10:05AM, Forrest Gump jogged up the street, earning thunderous applause.

The Dragon Con banner, which was carried by Waldo and Carmen Sandiego, led the parade. Not far behind came Sherry and Pat Henry. The Henrys had an escort from the Aliens Legacy Colonial Marines, complete with a color guard carrying the flags of the US, Great Britain, Canada, and the United States Colonial Marines. 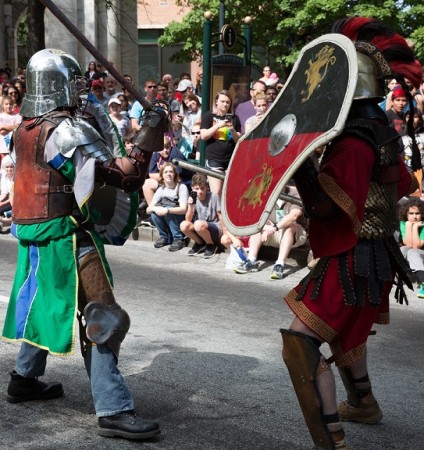 The parade shifted from science fiction to fantasy as the mounted contingent from Medieval Times rode down the street. After them walked a trio in knightly garb, one of whom was pushing a barrel with what appeared to be a shovel in it.

The first of two Blues Brothers patrol cars led a contingent of mini-scooters that included a Batmobile, a Pokeball, and a Zombie Outbreak fan, who did a wheelie on his scooter. Behind them came groups representing Mystery Science Theater 3000, Faith Hunter’s fans, including Hunter’s Jane Yellowrock character, the Cosplay Volunteers of Atlanta, the 105th Squad, and The Walking Dead.

Not unexpectedly, multiple superheroes marched in the parade, many of them as subsets of other groups like the Metro Atlanta Geeks, the Marvel group led by the S.H.I.E.L.D. tactical van, and the ever-popular box heroes and heroines. There was also a group of post-apocalyptic avengers. 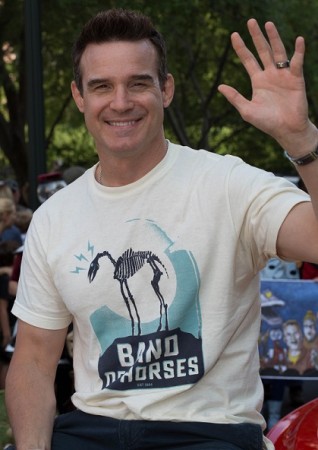 After the Marvel group came Grand Marshal Eddie McClintock, who smiled and waved at everyone along the route.

The Starfleet group represented different eras and included a Scotty who looked uncannily like the late James Doohan. A woman in the group pulled a Radio Flyer wagon full of Starfleet-costumed dolls, which drew comments from the crowd.

The Are You a Werewolf? group carried signs indicating their roles, with a child Batman carrying “Vigilante.”

When the Kaleidoscope Track came down the street, the Mayor of Megassa stopped to make campaign pitches to children along the route, who seemed to love the interaction. One child took a more active role when the Power Rangers marched by, running out to speak to them. The Ranger cosplayers chatted with the child and exchanged low fives until a woman ran out to bring the boy back to the sidewalk. 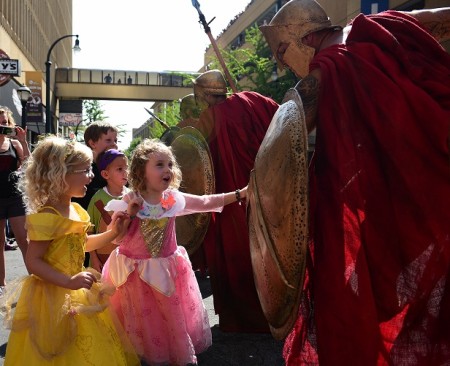 The Spartans had both red and blue squads. The red group stopped periodically, formed a shield wall, and posed while spectators’ cameras clicked rapidly. Adding to the fight-based interaction, the Society for Creative Anachronism supplied knights who sparred for the crowd.

After the Greek Mythology at Dragon Con group, led by Zeus and Hera, came the 11th Legion Roman reenactors. One of the marchers behind that banner, though he was not wearing Roman garb, amazed the crowd by balancing two crossed swords on his head as he walked.

The Realm of Middle Earth included Gandalf, Saruman, and several hobbits. After them came the Cruxshadows Fairies, complete with a dancer in the street and a car with music playing from a big sound system.

The Doctor Who group featured a Tardis-themed police car as well as a Dalek, several doctors, and a variety of Tardis-inspired costumes. 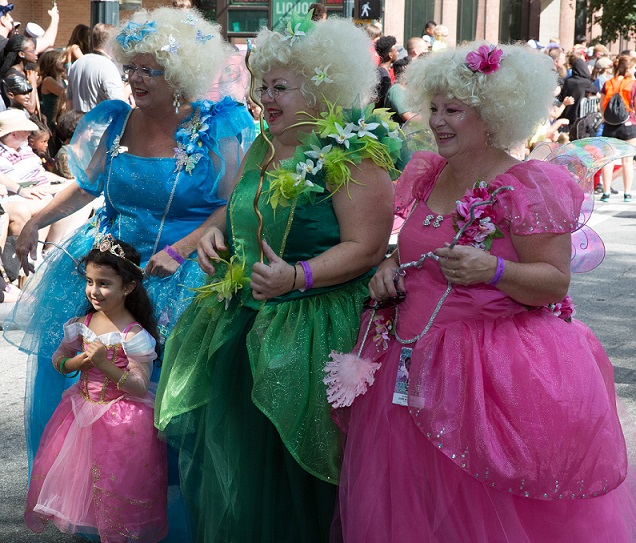 A large Disney contingent featured a couple of Cinderellas, one with her prince and fairy godmother, Aladdin and Jasmine, Ariel and Eric, Ursula on a scooter, Beauty and the Beast, and Sleeping Beauty’s three fairy godmothers, Flora, Fauna, and Merryweather. 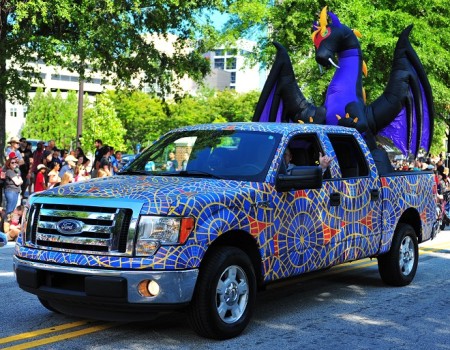 The Cult of the Marriott Carpet group, all dressed in costumes patterned after the Marriott’s old carpet, drew laughs from the spectators. They carried a banner that said, “You can’t pull the rug out from under us.”

Literary Guest of Honor Jim Butcher rode just ahead of a steampunk unit and the Lakeside High School band.

The Men in Black 3 squad and the Planet of the Apes group led the way for the Dune: The Sleeper Has Awakened group, which included a Bene Gesserit and a sandworm. 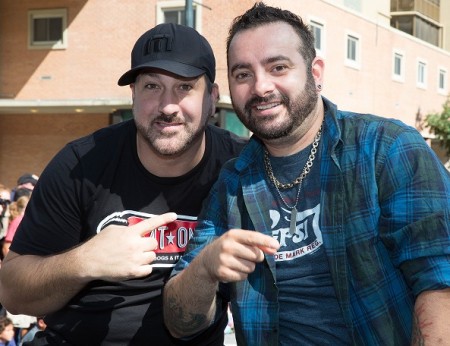 Joey Fatone and Chris Kirkpatrick of NSync, who will be co-hosting the Masquerade Sunday night, waved to the crowd as the Umbrella Corporation (US Division) rolled along behind them with zombies, soldiers and several vehicles. Farther down the route, Judge Reinhold bowed and posed for the spectators.

After the post-apocalyptic avengers came the Zombie Hunter Tactical Response vehicle, then the Dragon Con Blood Drive group, with the Bloodmobile.

Pokémon was also well represented, with several Ash Ketchums (one carrying a chainsaw), a Squirtle, and a Pikachu walking the route. 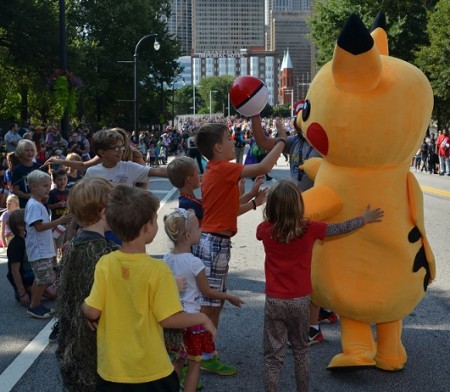 The Nocturnal Pirates of Atlanta livened up the proceedings with a float that had a music system and a mermaid.

As usual, Netherworld, led by a banner announcing, “20 Seasons of Screams,” rocked the float division with a big dragon. Behind them came the Ghostbusters, who had five cars or vans and a motorcycle. In that group were a ghostbuster in a Santa hat and a Captain Jack Sparrow ghostbuster.

The traditional unit of Periodic Table marchers all wore signs bearing the abbreviations for particular elements. As they walked, they pointed at the crowd and changed, “You are made of us.” One sign read, “Bespin’s Finest Carbon Freeze,” a note of Star Wars mixed into the science. 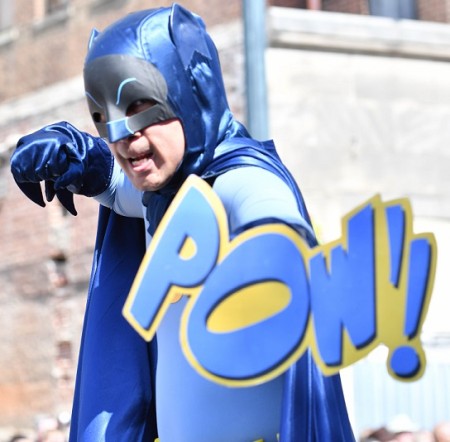 The 1960s Batmobile had an escort of Batgirl carrying a “Zowie” sign and Batman carrying “Pow,” tributes to the TV show. After them came a Wolverine-mobile with a female Captain America riding shotgun. The Suicide Squad followed them, with a Green Lantern car after them. A big squad of Deadpool cosplayers included Santa Claus, Galactus, and a Teletubbie. Poison Ivy and the Judge Dredd squad led the way for the Superhero Costume Forum, which included a Batman, Batgirl and Huntress who posed for the crowd, with the Scarecrow joining them.

Demonstrating a knack for adaptation, the Dragon Wheels group turned children’s wheelchairs into a variety of cosplay vehicles. The Puppetry Track contingent performed with two large puppets—the Worm from Labyrinth and Falkor the Luck Dragon from The NeverEnding Story—as they marched down the street. 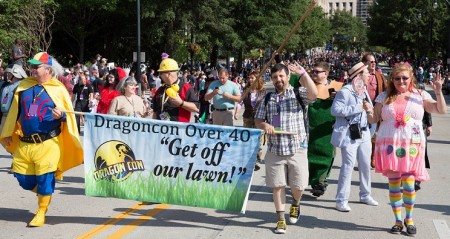 In contrast with their somewhat grumpy slogan “Get Off Our Lawn,” the Dragoncon Over 40 group marched along smiling and waving. Meanwhile, the Browncoat Bellydancers’ banner announced that they “aim to misbehave.”

As has become traditional, the next-to-last unit in the parade was the Star Wars group. A squad of Jedi did a lightsaber drill to the sound of a whistle and earned a round of applause. Behind a child-sized R2D2 came an adult-sized Jawa bearing a sign that said, “Happy Birthday, R2D2.” The unit also included box versions of Admiral Ackbar, Greedo—who carried a sign proclaiming that he shot first—and Stormtroopers.

Also in keeping with tradition, the parade ended when Futurama Santa came up the street, trailed by the EMT units and an Atlanta Police Department escort. The spectators dispersed, as usual in massive waves going in all directions. 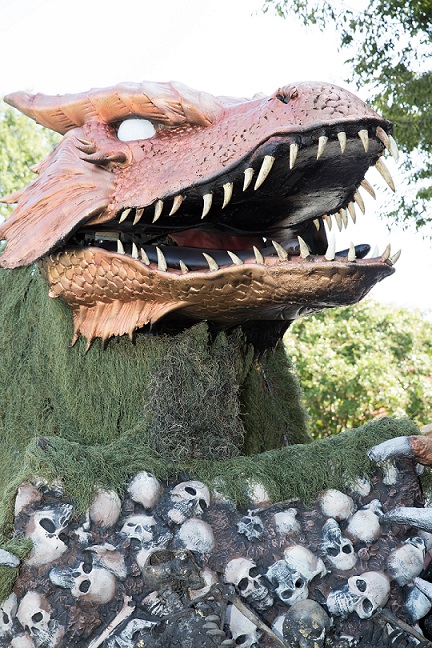 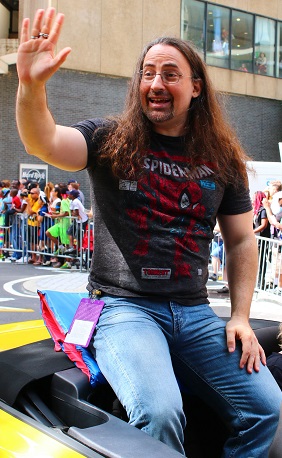 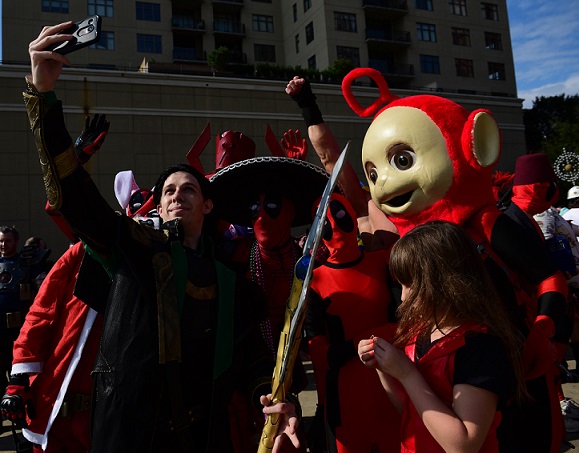 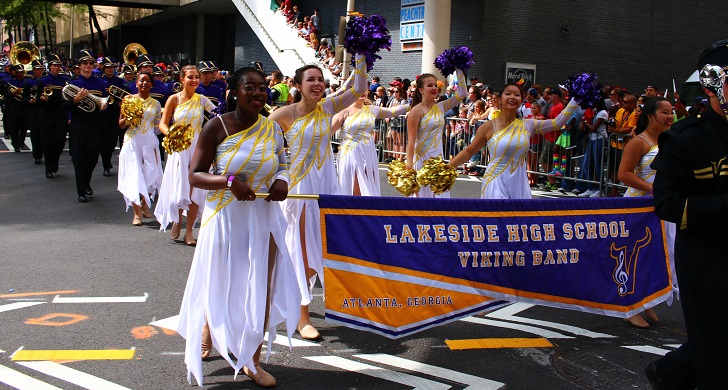 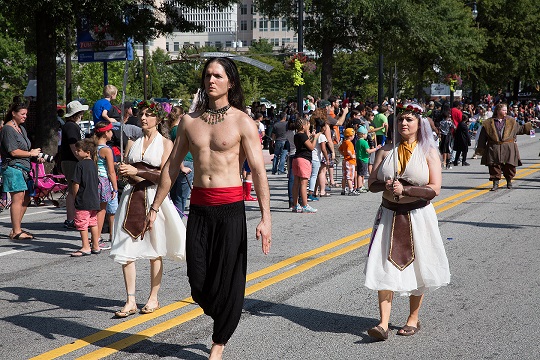 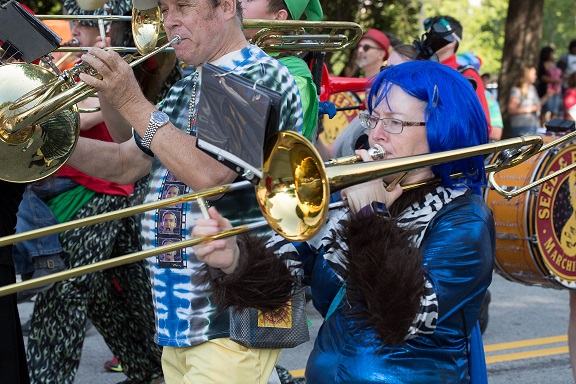 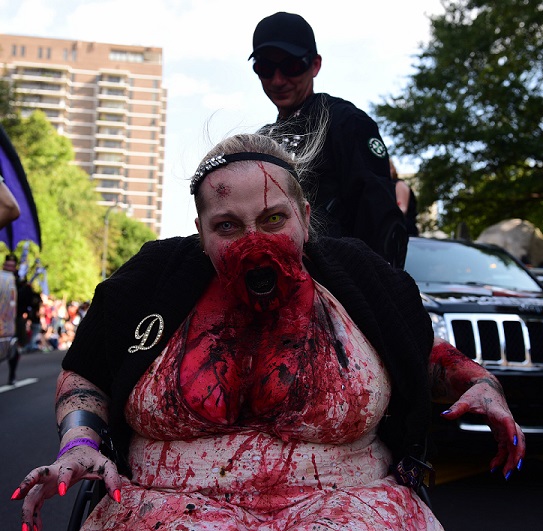 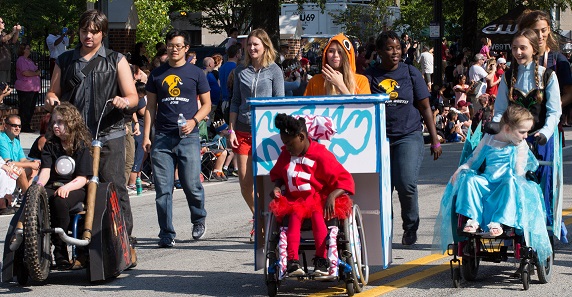 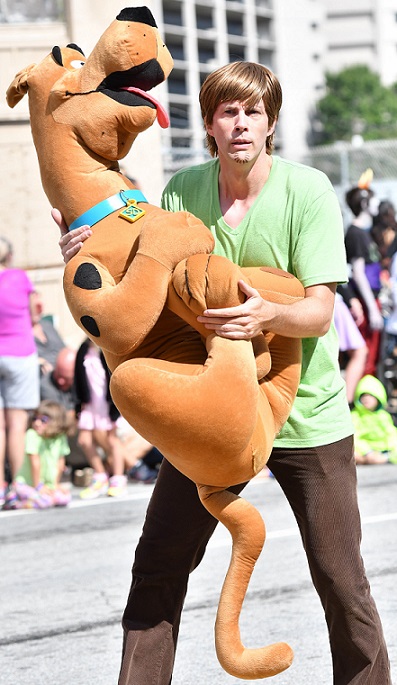 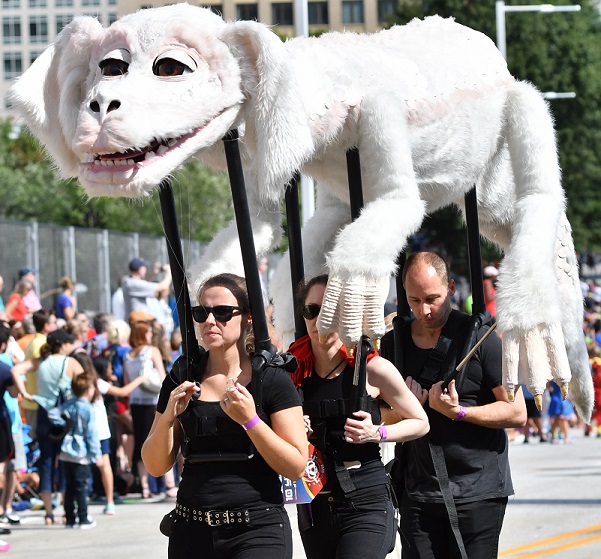 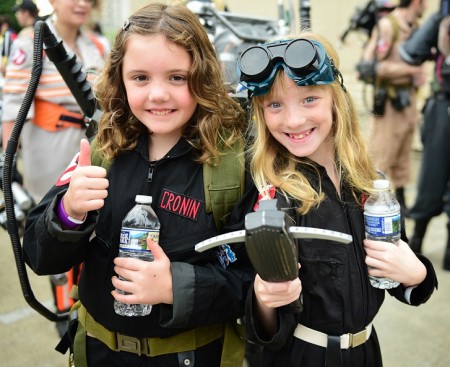 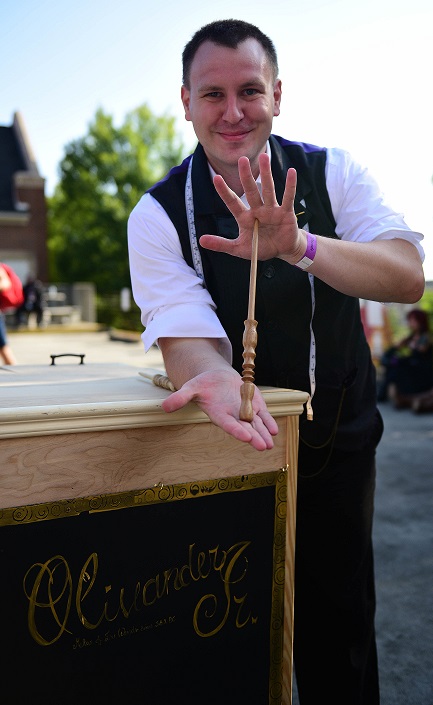 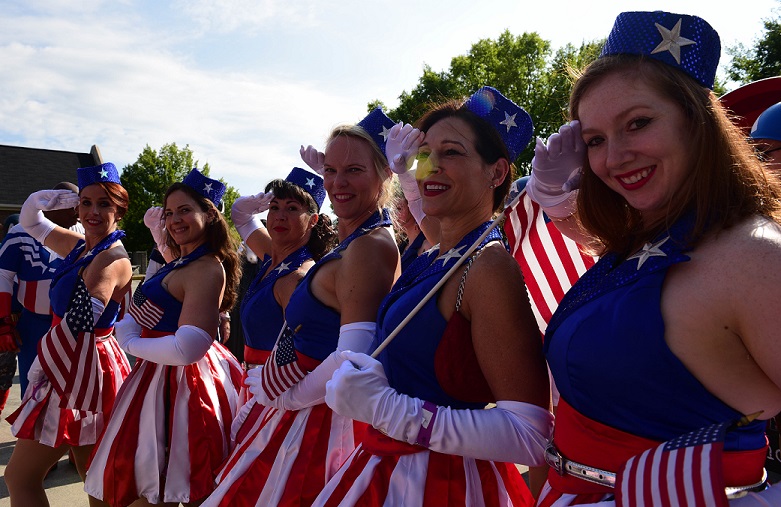 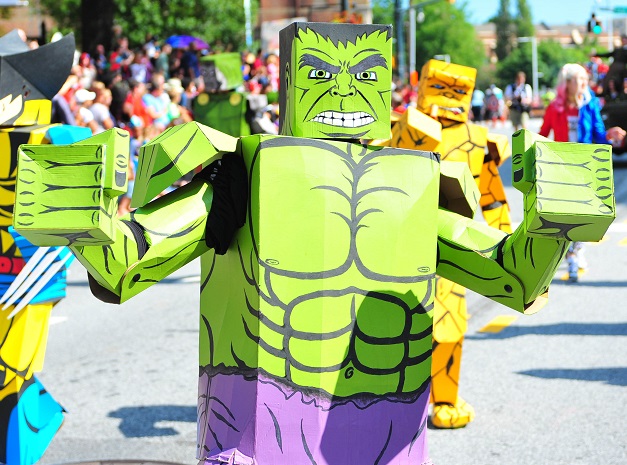 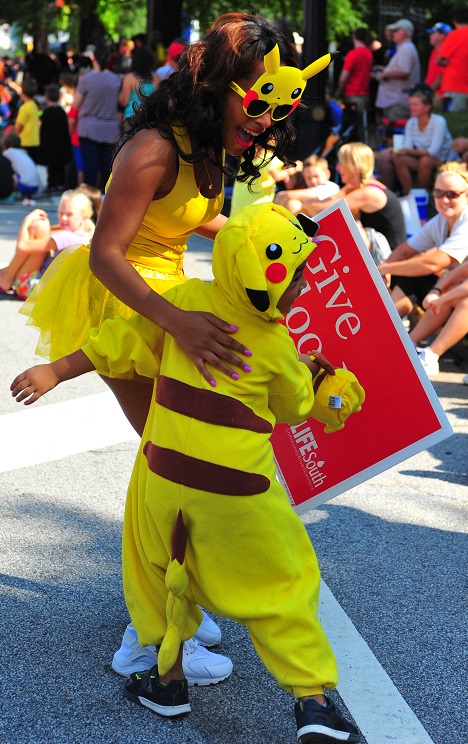 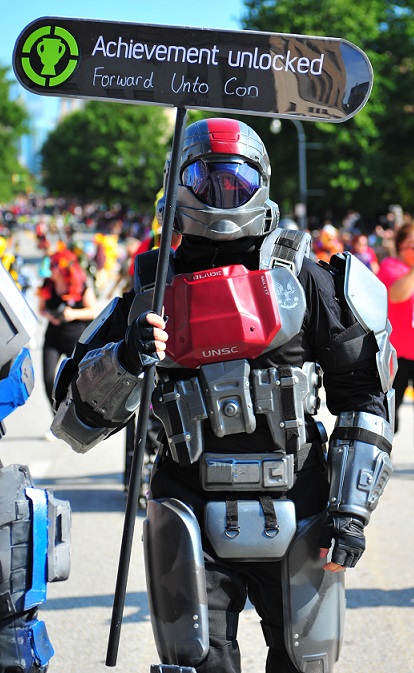 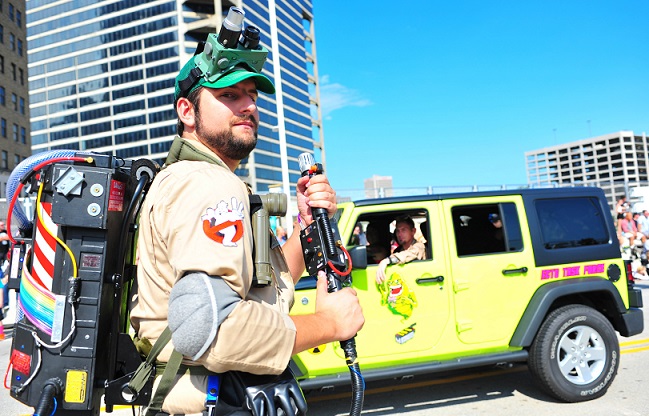 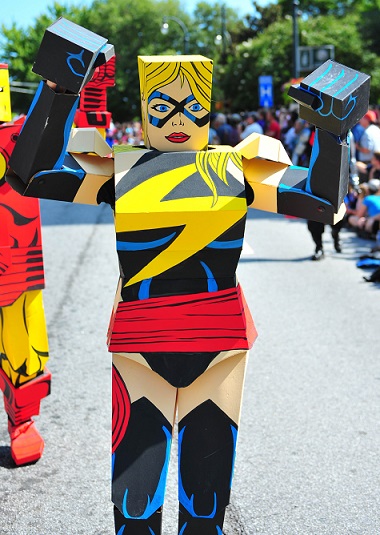 All photos by Dragon Con Photography