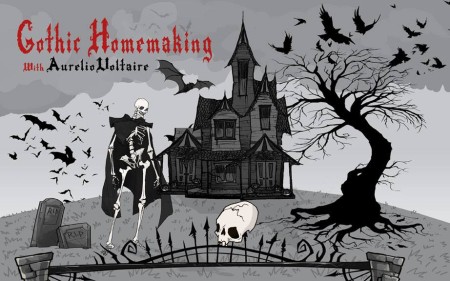 Aurelio Voltaire, author of What is Goth? and Paint It Black: A Guide to Gothic Homemaking (often an item on books-you-didn’t-think-existed lists), premiered his new web series, Gothic Homemaking, at Dragon Con 2016. Voltaire took to the stage in the packed Hilton Crystal Ballroom Sunday evening, explaining how the idea for the web series came about as he was moving back to his small New York City apartment and was ready for a new look. This look, he said, needed to be like a Gothic lair where you would find Dracula.

In the beginning, the series was meant to be ten-minute videos showing the progress of the renovations. Once he filmed and started editing, they made more sense as 30-minute shows. He ended up with enough film for eight episodes in the first season and has plans for a second season at some point in the future.

After the introductory context, the lights dimmed and the show began. The premiere of Let There Be Light, the second episode in the series, was classic Voltaire. With his sidekick, “Orville Deadenbacher” (a desiccated corpse), cracking funny jokes at the star’s expense, we watched as the minuscule apartment began its reformation. After a coat of gray paint (well, make that two since the first came out lavender), Voltaire installed black ceiling tiles and black floor tiles. He then took us on a trip to the New York lighting district to find an appropriate chandelier.

In addition to major projects like painting and tile installation, Voltaire included smaller craft-type projects. The project in this episode was to transform a boring floor lamp from The Home Depot into a lamp reminiscent of lamps you might find in a cemetery. There was also an Etsy purchase—a Frankenstein-style light switch for the chandelier.

The premier ended to rousing applause, and Voltaire retook the stage for a brief follow-up. He mentioned that the show would continue the kitsch with titles like Size Matters and Shame of Thrones, and would air on YouTube beginning Thursday, October 6, at noon EST. Subsequent episodes will continue every Thursday at noon.

Voltaire then opened the floor to audience questions. “Are you like your live performances?” asked one attendee, a reference to his embrace of mistakes while performing. Voltaire pointed to the lavender paint and a snafu with the floor lamp as examples of just such mistakes that will be included in the series.

Another attendee asked if Voltaire would be delving into more difficult things like electrical and plumbing? “No,” the artist said, as he wanted this to be for people like him who have an average skill level and are crafty. He was also working within a budget.

“Will Orville (Deadenbacher) be speaking in future episodes?” another attendee asked, a reference to the sidekick having been relegated to subtitles. “You can’t hear him?” shot back Voltaire.

One attendee was more interested in the music chosen for the video and mentioned she thought it was cool that he was featuring new or up-and-coming artists. Voltaire explained that the money for the series came from his Indiegogo campaign. One of the gifts for donating a certain amount of money was having your music featured in an episode. He said he was lucky that the song featured in this episode happened to fit perfectly, and he hopes future songs will as well.

The final question was regarding how to decorate in the Goth style when you have a non-Goth partner. Voltaire mentioned that it can be extremely difficult and the difference is the line between high design and Halloween. He mentioned that, in a future show, there will be a couple of bat sconces. “These could easily have been cheesy, but they are Victorian and made of metal, so they fall in the high-design category.”

You can catch Voltaire’s Gothic Homemaking and his other work on his YouTube channel, The Lair of Voltaire.