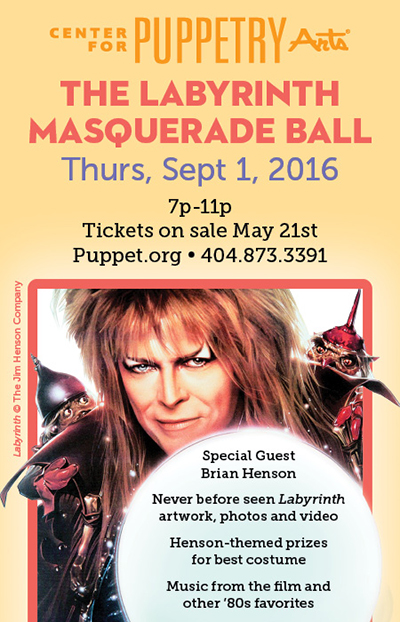 As one of the pre-convention events, the Center for Puppetry Arts will host the Labyrinth Masquerade Ball from 7–11PM on Thursday, September 1. This sold-out event celebrates the opening of the Center’s special exhibit Jim Henson’s Labyrinth: Journey to Goblin City, which includes behind-the-scenes artwork, photos, and video from the 1986 movie starring David Bowie and Jennifer Connelly. A costume contest will be judged by special guest Brian Henson. A Dragon Con badge is not required for entry, but free shuttle service will be provided from the host hotels to the Center.

During Dragon Con, the Puppetry Track will host the Henson 60th Anniversary Costume Contest on Sunday, September 4. Attendees can compete for prizes dressed as a favorite Henson character, including awards for first, second, and third places overall, best use of puppetry, best use of materials, best child (12 and under), and audience favorite. Pre-registration is required, and the contest is limited to 50 contestants. Pre-judging begins at 1PM in Hilton room 308, with the contest kicking off at 4PM in Hilton Grand Salon West.

Henson will also participate in several panels during the convention. Check the Pocket Program and the Dragon Con app for days, times, and locations.