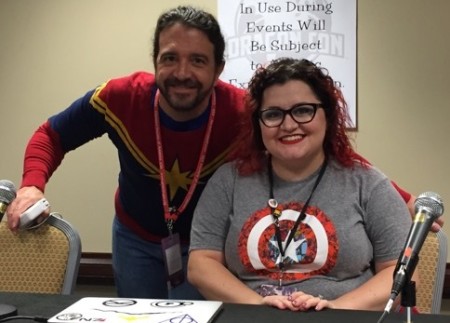 You know when you walk into a room and Eric Spanna is a panelist, it’s going to be a great time. I’d not seen Sarah Bay speak before, and her witty and charismatic counterpoint made for a wonderful discussion about the cinematic methods used to turn Steve Rogers into Captain America and how they might be able to reproduce that work without turning into The Hulk. So, on Saturday afternoon at 1PM, we braved the crowds at the Hilton to watch the transformation during the panel “Re-creating Captain America’s Super Soldier Serum.”

There are two key factors found in the Captain America films that we need to contend with: first, the injection of a blue Windex-like substance into his muscles, and then the saturation of “Vita-Rays.” We begin with the injections and are taken on an Alice in Wonderland–type journey through the wonders of myostatin, also known as growth differentiation factor 8, abbreviated GDF-8, which inhibits muscle growth. So, if we want muscle growth, why would we be interested in that? Because follistatin and GASP can both inhibit myostatin—turn it off—resulting in a mutation that causes huge muscle growth. Or as Spanna puts it “The inhibitor of my inhibitor…” This part is certainly not science fiction and has been found in Belgian blue cattle, mice, rabbits, and other animals including the Bully Whippet, which Spanna theorizes would be Captain America’s dog if he were to have one.

How do we cut DNA to create that type of mutation? With a CRISPR—which, of course, is not the bottom drawer of your refrigerator as once thought but clustered regularly interspaced short palindromic repeats. These are segments of DNA containing short repetitions of base sequences. Each repetition is followed by short segments of “spacer DNA.” Why is that important? Because we can use Cas9 and gRNA carried via the base paring to delete the myostatin gene. The DNA is cut by CRISPR, put into an embryo, and incorporated to produce a mutated mouse.

But Captain America wasn’t created by multiple generation mutations, so we need to find another way.

Spanna and Bay theorize that, by introducing Cas9 and gRNA into a virus, they can inject Steve Rogers causing the change. But, what about the Vita-Rays (which are wholly fictional, and surprisingly visible). Here, they introduce optogenetics. Light can be used to activate certain neurons and change proteins, allowing access to the nucleus of a cell. Introduce Cas9 into the nucleus and we can activate the complex using Vita-Rays. The panelists went on to discuss how Vita-Rays differ from gamma rays because, for Bruce Banner and Emil Blonsky, that didn’t work out so well. Gamma rays mess with DNA; they can punch holes in it and cause all sorts of mutations. Can they cause a mutation to turn a man green using hormonal changes? Apparently so.

The two things the duo have no answer for are Steve’s huge increase in metabolism (allowing him to drink and drink without getting drunk) and how, with injections into his muscles, he grew about six inches taller. For these questions, they encourage all of us to find a question, research, theorize, and share with the scientific community. Be curious, and ask the questions. You might find some truly interesting answers.