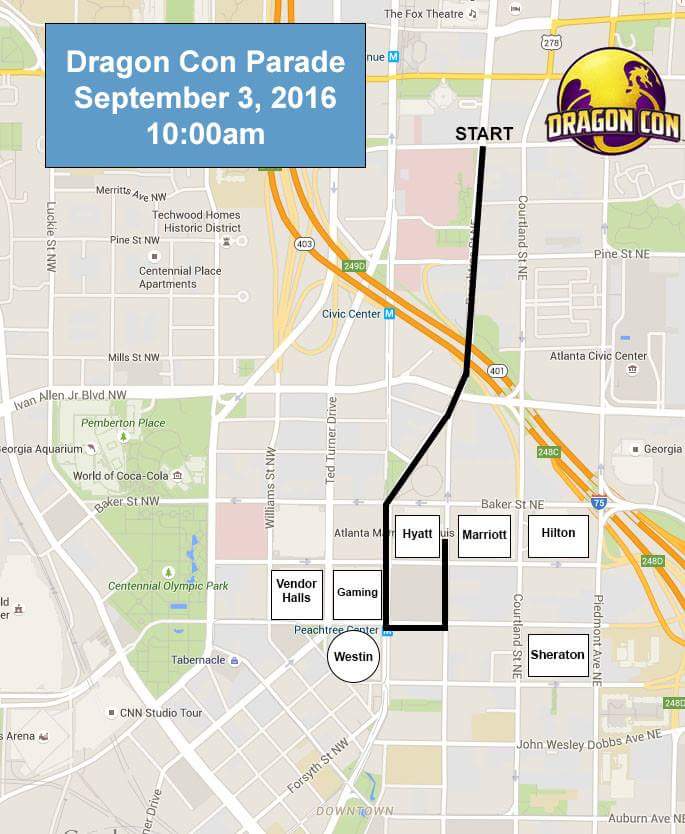 The Dragon Con Parade will be available to everyone in the Atlanta area this year thanks to its first television broadcast. The CW channel 69 will televise the parade live locally at 10AM Saturday, September 3, sponsored by Six Flags Over Georgia. A rebroadcast will air at 8PM.

The parade will also be broadcast live to the five Dragon Con host hotels on Dragon Con TV and via streaming membership. Visit DragonCon.tv for details, or stop by a Dragon Con store location to purchase.

For those who want to see the parade in person, the route begins at Peachtree Street Northeast and Linden Avenue, near the North Avenue MARTA station and Emory University Hospital Midtown. The parade will continue south along Peachtree Street, pass by the front of the Hyatt, and turn left onto International Boulevard before turning left again onto Peachtree Center Avenue and finishing up behind the Marriott Marquis.

This year’s parade lineup is full. Parade participants can check in near Registration in the Sheraton Georgia Ballroom, Thu 10AM–10:00 PM and Fri 9:30AM–8PM.