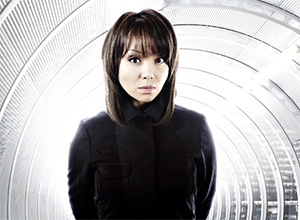 Naoko Mori, best known to Dragon Con audiences as Toshiko Sato in Torchwood, is making her first appearance at the con. She took a few minutes to answer some questions about her time on Torchwood and Doctor Who, as well as some of her experiences on stage.

Daily Dragon (DD): You had a guest spot on Doctor Who before Torchwood. How soon after appearing on Doctor Who did you know about Torchwood? Was it planned from the beginning that your Torchwood character would be connected to that character?

Naoko Mori (NM): I never thought my appearance in Doctor Who would lead to Torchwood! I can’t quite remember but I think it was about 6 or 8 months after I filmed Doctor Who. Out of the blue, I got a call from Russell [Davies] and the team via my agent. I was told that Dr. Sato (who I played in Doctor Who) might be connected to Toshiko Sato at the beginning—but it was never confirmed right up until the very end when we received the script of the last ep of season 2.

DD: I actually found Doctor Who because of Torchwood, so thank you for that. Have many other fans told you of having a similar experience?

NM: Thank you for watching! I’ve met a few people who got into Doctor Who after Torchwood, and some who have got into them after Sarah Jane Adventures, etc. That’s the great thing about all these shows, the communities of fans, and conventions such as Dragon Con. People connect to certain shows, which then connects them to other shows and other fans, then the conventions connect all of the fans together.

DD: What is something that you have taken away from your experience being on Torchwood and connected with Doctor Who?

NM: Firstly, it introduced me to a whole new genre that I hadn’t really watched/worked on before. When I got the role in Doctor Who, I didn’t actually know who Doctor Who was. It really was “Doctor Who??” to me. I even tried looking up the word “TARDIS” in the dictionary after reading the script because I didn’t know what it was. Being introduced to and working on these shows, it’s really opened up my eyes, and my imagination—both as an actor and a viewer. SO much is possible. What I also loved about Torchwood especially is that it was so many things. Drama, comedy, sci-fi, action, fantasy—all in one show.

DD: Toshiko and Gwen are both incredible characters who are fully formed and well-written. They’re leaders and experts in their fields. How important is it to you to have that kind of representation for female characters? Does it influence how you choose roles?

NM: Yes, absolutely. For me, it’s all about the writing and the characters. They don’t always have to be leaders and experts, but they’ve got to have some character and be interesting.

DD: I am SO HAPPY to see that you have been able to revisit Toshiko with Zone 10 by Big Finish. What is it like coming back to her as a character after all this time? Are you able to just pick up where you left off?

NM: Thank you so much! I was super excited to revisit Tosh, but I was quite nervous. I wasn’t sure if I could “find” her again, but as soon as we started, bam! There she was. Must say I felt a little emotional afterwards. I really missed Toshiko and Torchwood. I loved Tosh and we had SO much fun filming the show. Torchwood and Tosh will always have a very special place in my heart.

DD: How much crossover have you experienced with fans of Torchwood versus fans of Absolutely Fabulous?

NM: Surprisingly, quite a bit. They’re very different shows but both Toshiko and “Titicaca” (Sarah) are kinda geeky so maybe that’s why? I prefer playing geeky characters—they’re much more interesting.

DD: Miss Saigon is one of my favorite musicals and I read in your bio that you were in the West End production as Kim at the age of 17, opposite John Barrowman. What was it like headlining such a challenging show at that age? What are some of the things you learned from that experience?

NM: I was so lucky to have been part of Miss Saigon, and I’ll forever be grateful to Cameron Mackintosh for giving me my first big professional break. I learnt so much on Miss Saigon. It kind of was my training as I chose the show over going to drama school. It was a huge challenge (and a very scary one, too) but because it’s such a fantastic show that’s so brilliantly written and produced—and I was so well guided—it sort of felt “organic.” The biggest thing I learnt from it was to always be truthful in acting.

DD: You revisited the West End in Avenue Q in 2006, between series of Torchwood. What are some of the differences between acting for the stage versus acting for television?

NM: I absolutely adore Avenue Q; it’s such an amazing show! The biggest difference is with stage is it’s all in “real-time”—whereas with TV and film, scenes aren’t shot in chronological order. TV and film can become quite technical, too, so that can be a challenge, too.

NM: Ha, it seems that way, huh? I’m a foodie in the sense that I love and appreciate food. Food is really quite amazing when you think about it. Not only does it nourish and fuel you, it engages and feeds all the 5 senses. You touch, smell, taste, hear, and you eat with your eyes. And food feeds your soul too.

These days we’re so busy we often rush and eat on the go, or eat whilst doing something else like in front of the TV or computer. We forget to stop and see and really taste the food. In Japan (like Italy and France), some of our meals can go on for hours with various courses and dishes. I’m not saying we should/want do this every meal time, but I do think we sometimes forget to take time over food and appreciate it. I’ve been trying to do that more myself recently, so hence the foodie-ish tweets.

DD: Coming to a con, you’re basically a rock star to us. We think of you as incredibly well known and famous and are shocked when someone doesn’t know who you are or what you’ve been in. What’s the non-convention reality like? Are you frequently recognized out in your daily life and if so, how do you handle those interactions?

NM: I do get recognized from time to time. It usually happens when you least expect it, like in the supermarket. You sort of forget you’re an actor when you’re doing everyday things like grocery shopping, so it’s always a bit of a surprise when someone comes up to you by the fruits and vegetable section or something; 99.9% of the time people are lovely and very respectful, but on a few occasions I’ve had people follow me or secretly take photos, or stop me while I’m mid-phone call which kinda isn’t cool.

DD: What is your favorite part of doing conventions like Dragon Con?

NM: Meeting all our lovely loyal fans. Without them, we wouldn’t be here (literally) so a big, big thank you to all our wonderful fans! Conventions are the only opportunity we get to meet and chat with them. I always enjoy meeting DW and TW fans—we’re like one big family, and we always have so much fun. I love seeing all the amazing cosplay too. Some of them are just mind-blowing!