Any panel that starts out with Molly Lewis performing the theme song from the top of her show, and then forgetting the lyrics, is definitely something special. The panel, “You Wrote a Musical about WHAT?: Writing Niche Musical for a Niche Audience,” was all about her show, Thanksgiving Versus Christmas: A New Holiday Musical by Molly Lewis and how she and Josh Cagan wrote, created, and staged the performances at The Triple Door in Seattle. Also on the panel at 11:30AM in Regency VI–VII (Hy) was Joseph Scrimshaw, who directed the show and served as the narrator, and The Doubleclicks, who performed in the show.

The show was created as a way for Lewis to make a case for Thanksgiving, which she feels is underappreciated and bowled over by Christmas. “We kind of go from Halloween straight to Christmas and it bums me out. So I’m taking a stand. In song,” she said.

The panel also offered their opinions on Thanksgiving, which was overwhelmingly pro. Cagan summarized his opinion with, “I like naps,” which of course features heavily on Thanksgiving. Scrimshaw was the lone voice of mild dissension, saying that he had mixed feelings about Thanksgiving. For him it used to be just like Christmas with all of the emotional family difficulty and guilt with none of the payoffs of Christmas presents, but that now he and his wife celebrate Thanksgiving together and it has changed how he feels about the holiday.

Writing the show started with “about a year of dithering” as Cagan put it, but was a true collaboration between him and Lewis with the songs influencing the writing just as much as the writing influenced the songs. Scrimshaw added that the musical did what it was supposed to do, which was have the singing be the part of the highest emotion that served the deeper thematic story, while the non-singing parts served the main story.

When Lewis forgot the words to her opening song, she was helped out by moderator Aaron Fever holding the lyrics sheet that’s in the liner notes of the show’s CD. It was important to Scrimshaw that the recording be listenable to those who haven’t seen the show and eliminating too many physical sight gags. It was also important to Cagan and Lewis that the show not be an evening of “utter nonsense for a ‘square’ walking in off the street” but service the geek community that was sure to attend. Scrimshaw added that the show was richer if you were already a fan of the people performing the show but that it remained accessible to everyone. The challenge for Lewis was to determine how much information it was necessary to reveal about each performer so that the songs would work. In the case of The Doubleclicks, all that was really needed was to note that they were sisters and one was older than the other, or that Marian Call is from Alaska. 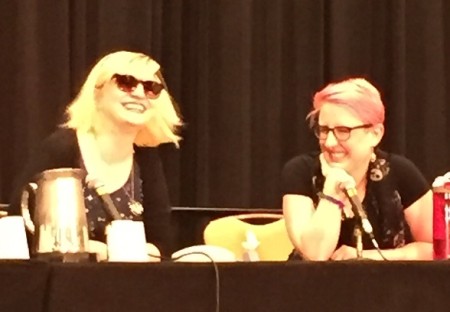 The Doubleclicks (otherwise known as Angela and Aubrey Webber) commented that performing in the show was much more like “a big party with all of our friends and then we did a show!” They got to play themselves with content that they didn’t have to write, which resulted in them “getting a lot of praise for something they didn’t do,” Angela noted.

During the panel, Lewis also performed “The Pumpkin Spice Lament,” all about the too-early demise of the availability of pumpkin spice lattes, and “Thanksgiving > Christmas,” which is largely about how Thanksgiving is better because Lewis’s birthday coincides with it and she gets presents no matter what.

Lewis has CDs of the show to purchase, which she will have with her at “Gonzoroo: The Deep Hurting Summertime Special,” Saturday at 8PM in the Marriott Atrium Ballroom. The CDs come in two versions: a single disc and a double disc. The single disc is $25 and the double is $30, and yes, they can take credit cards as payment. The album is also available on Bandcamp for purchase at https://mollylewis.bandcamp.com/album/thanksgiving-vs-christmas.