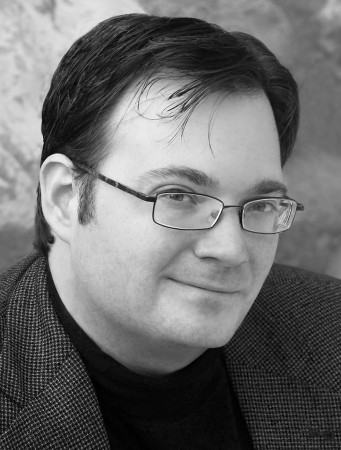 Brandon Winn Sanderson has shot to fame for his extraordinary storytelling abilities, surprising plot-twists, intricate magic systems, and compellingly believable characters. This prolific, Hugo-award winning author is turning out books at an impressive rate of up to three per year. Chosen to finish Robert Jordan’s Wheel of Time series, Sanderson also found time to release The Way of Kings, the first book in his The Stormlight Archive epic fantasy series, which debuted at number seven on The New York Times Best Seller List. In 2014, the second book in the series, Words of Radiance, justly debuted at number one. Fans are eagerly awaiting the third installment of this fascinating and ground-breaking series.

While writing these massive tomes, Sanderson has found the time to extend his popular Mistborn trilogy by writing a second trilogy based on Wax and Wayne, the protagonists in The Alloy of Law. He also produced a YA trilogy called The Reckoners, based on a world where all super heroes are evil and must be defeated, as well as five offerings in the Alcatraz vs. the Evil Librarians series for young readers. He has also written a book for teens, The Rithmatist, that presents them with chalk drawings that come to life via an intriguing new magic system. The book includes simple mathematical concepts from geometry deftly and entertainingly woven into a tale that will delight young and old alike.

Despite his busy schedule, Sanderson took the time to answer a few questions for the Daily Dragon.

Daily Dragon (DD): Congratulations on your success with your epic fantasy series, The Stormlight Archive. Can you tell us a little about your vision for the series?

Brandon Winn Sanderson (BWS): I wrote The Stormlight Archive, actually started it during the darkest part of my unpublished career, when I was trying to write books to the market rather than just writing what I loved. What I loved wasn’t selling, and what I wrote for the market was even worse.

So I sat down and decided I’m going to write the biggest, baddest, most epic fantasy epic ever… a fantasy that is the book that no one is writing and I want to read. And I’m going to make it longer than any I’ve written before because everyone tells me my books are too long and that’s why they don’t publish them.  I’m going to make it have this enormous and awesome cast of characters, and I’m going to do all the things that I want to do in fantasy. I’m going to make a world that’s so different from other fantasy worlds. And I did it almost kind of like flipping the bird at the publishing industry because I’d written 12 books at that point and none of them sold.

After I’d finished that book is when my sixth book, Elantris, sold. Suddenly I’m like, “Wow, now they’re actually buying my books. What’ll I do with this one?” So this became the project of my heart. I didn’t worry about what anyone else wanted. I just wrote the book for me.

So my vision of it is to have the biggest, baddest, most awesome fantasy series that’s ever existed. It’s going to be two, five-book arcs, a 10-book series, because there are 10 orders of knights radiant and 10 main characters.

Small goals, you know. Set small goals for ourselves.

DD: Since you outline before you write, how do you put in so many surprising twists?

BWS: I am a planner, and I think a good ending often benefits from a strong outline. The problem is, if your outline is too rigid, your characters feel stiff. So there’s a back and forth when you’re doing that to make sure your characters can still live.

What I do is I build an outline, and then I revise it as I’m writing the book. The later books are like a page rather than a 30-page outline. As I write each book, even in the middle of it, I’m revising these outlines, and they’re changing and shifting as I’m writing the books. So I have the flexibility to both know where I’m going, so I can have those endings that click and come together, but also have characters that feel like they have autonomy over their plots.

[It takes] lots of practice, and lots of thinking about your books.

DD: Thank you so much!

The second part of this interview can now be found here.