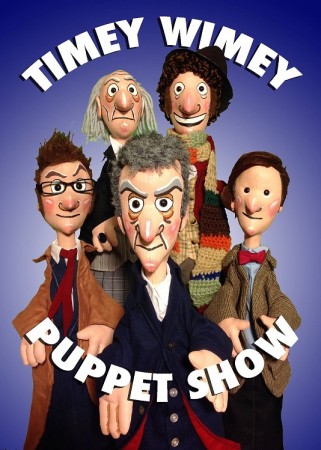 There was a packed house in the Marriott Saturday evening for a pun-filled, Christmas-themed puppet show starring Doctor Who. Puppeteer Mike Horner elicited peals of laughter from the audience. The show opened with a life-size TARDIS in the center of the stage, and the show was acted on the roof of the TARDIS. The 11th Doctor began the show by explaining there would be no more episodes this year, but there would be a Christmas special. He decorated the TARDIS with gold garland and lights, and then a mysterious gift appeared. Once the box was opened, the Doctor was attacked by a laser monkey—a gift from Strax to protect them from the audience, whom he perceives as enemies. Once the confusion cleared and Strax left with his laser monkey, in popped River Song. “Thank you for coming everyone. Goodbye!” yelled River as the Doctor tried to explain that she was too early and we had just begun. After a little back and forth, River left with a tease about a smooch and her favorite remark, “Spoilers!”

The rest of the show moved along in this manner with a little audience participation sprinkled in. The Seventh Doctor appeared and conducted the “Timey Wimey Puppet Show” theme song, sung by the audience, accompanied by him on spoons, and based on the actual theme song from the Doctor Who TV show. Sing along with us… Timey Wimey, Timey, Wimey, Timey Wimey, Puppet Show (repeat once) Spoons, Spoons, Spooooooooooons, Spoons, Spoons, Spoons… It was a fun way to warm up the audience. After this opening scene, a hilarious attempt to explain who River Song is to the First Doctor spiraled out of control. With silly confusions such as Amy Pond and Rory Williams had a child, Rikki Lake, or a child, Dawson Creek (get it? Pond, River, Lake, Creek? Okay, okay back to the story.)

The next Doctor to visit was the 12th. He looked very cool with his sonic sunglasses on. When River shows up, this time she begins looking for her husband, not recognizing the Doctor in front of her. 12 gave hints such as, “I solve problems in a creative and fun way.” Her guess: Dr. House. The second clue was “I sometimes say things like Wibbly Wobbly.” “Oh, you’re Dr. Seuss,” as she pulled out a book to be signed. Finally, he removed the sunglasses, and she recognized him. Off she popped again, promptly followed onstage by one of the Sisters of Plenitude, who came to sing Christmas carols, specifically Jingle Bells, in full meow mode.

After the musical interlude, we were back to punny business with a loose rehashing of the past season. A trip to Skaro provided an encounter with a Handmine, who was quite handy in helping to elicit comments such as, “on the other hand,” “lend me a hand,” and “I need a handyman on the TARDIS.” Baby Davros followed, and in a Dalek-styled crib, no less. This portion finished with Strax trying to feed the baby with his genetically modified lactation, and Davros jumping from his crib to escape.

Audience participation continued with the 10th Doctor inviting two attendees on stage for a Guess-the-Pun competition. The Doctor’s assistant during this segment was one of the Ood, Holly Ood to be exact (remember, we’re playing with puns here, folks). The genres for this contest included movies, television, and music, and the answers all had to include “Ood.” First clue: a picture of Clint Eastwood in a western costume and the theme song from one of his classic movies. Answer: “The Ood, the Bad, and the Ugly.” Next came a picture of Tony Randall and the theme song from his 1970s hit TV show. Answer: “The Ood Couple.” A movie catchphrase came next. From one of our more recent blockbuster hits, a green-haired Effie Trinket puppet provided this clue. Answer: “May the Oods be ever in your favor.” And finally, a hard rock question, with a picture of Aerosmith frontman Steven Tyler and the opening strains of one of his most well-known songs. Answer: “Ood Looks Like A Lady.” The winning contestant walked away with her very own Handmine puppet as a prize.

As the show came to an end, River Song returned, again in the wrong section of the show, welcoming the audience this time around. As the 11th Doctor cleared things up yet again for the always out-of-sync River, he asked if he would finally get his smooch. River completely set up 11 and disappeared, only to be replaced by the laser monkey from earlier. As 11 went off to deal with the monkey, the First Doctor appeared, again along with River. He invited her for some cocoa (remember, this is a Christmas special), and she agreed. As they left the stage, River turned back to the audience one last time, “Spoilers!”