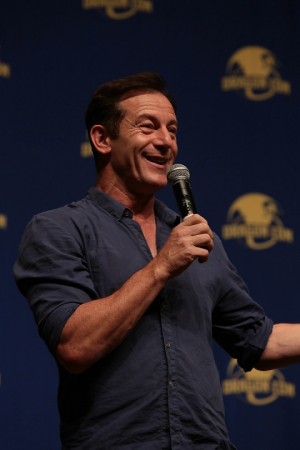 How do you see Lucius Malfoy? Most likely not a different actor with short hair and a pinstripe suit. It almost happened. In the panel “Wait Until My Father Hears About This!” in Hyatt Centennial II–III on Saturday at 2:30PM, Jason Isaacs talked all things Harry Potter to a packed ballroom.

Isaacs surprised the crowd by revealing that he first auditioned for the part of Gilderoy Lockhart. His agent had sent him the script and the first four books. He read the script, but not the books. After his audition for Lockhart, which he says was brilliant, they asked him if he’d read for a different part—Lucius Malfoy. He went outside, called his agent, and told him he didn’t want to do it. His agent talked him into auditioning. Not long after, he was offered the part.

He turned it down.

At the time, he had just gotten the part of Captain Hook in Peter Pan. He was concerned that the characters of Malfoy and Hook were too similar. How could he make Malfoy unique? His agent told him to take a weekend and think about it. He started reading the books. Three days later, still in the same clothes, he closed book four and wondered where the time had gone. Lucius Malfoy had gotten his movie start.

Short hair, polished pinstripe, and all business, Malfoy’s costume didn’t enthrall Isaacs. He couldn’t understand why a man who hated Muggles would dress like one. Isaacs envisioned robes, velvet, ermine, and fur. And blond hair. Wizard hair. He ripped down a curtain, tossed it around his shoulders, grabbed a cheap blond wig, and wore the ensemble on set. But that wasn’t enough. He needed a cane. A cane with a concealed wand inside that he could whip out like a sword. Lucius Malfoy still wasn’t complete.

Malfoy needed a voice. The right, over-the-top voice. Isaacs combined the voices of a patronizing teacher he’d had many years ago and a pompous British critic. The sneering sarcasm didn’t have the director or the producer convinced. The producer, an American, asked him if anybody actually sounded like this. When Daniel Radcliffe said it sounded cool, they relented. Lucius Malfoy was almost right.

In his first scene, the director allowed Isaacs a lot of creative freedom, which allowed him to bring Malfoy fully to life. Rather than physically closing the door of Dumbledore’s office, he waved his hand to magically slam it shut. Next, he asked where Dobby was supposed to be. They told him to look anywhere he liked, and they would place Dobby there. He looked down, kicked his leg out, and smacked his cane around. Worried for his safety (and sanity), they asked if he was okay. Was the floor wet, since he seemed to be flailing around? He told them that he’d kicked Dobby down the stairs and had whacked him on the head when he tried to get back up.

The foam on the butterbeer of Malfoy’s perfection was having him need to get in the last word. According to the script, Dumbledore had the last line, but Isaacs thought Malfoy wouldn’t walk away in silence. He demonstrated for the audience how he turned to the unsuspecting Radcliffe and sneered the now infamous line, “Well, let us hope that Mr. Potter will always be around to save the day.” To which Radcliffe replied without missing a beat, “Don’t worry, I will be.”

Despite all his hard work and genius in creating Malfoy, kids almost never recognize him. Parents, however, do. They drag children up to him and have this conversation:

The kid just looks at him blankly.

“Do you mind telling him who you are?”

“Could you tell him what you do?”

“Could you tell him what you’re in?”

The kid takes a good stare at him up and down. “No you’re not.”

The parents go, “Can you do the voice?”

Authors of the article

Debbie Yutko lives near Atlanta with her husband, two children, and two cats. When she isn’t gardening, rescuing homeless kittens, or cramming math formulas into teenagers’ brains, she can be found stringing words together at her computer and dreaming of adventures in far-off lands. She is a lifelong reader of Science Fiction and Fantasy and a veteran attendee of Dragon Con, where she enjoys attending panels and working with the talented staff of the Daily Dragon.