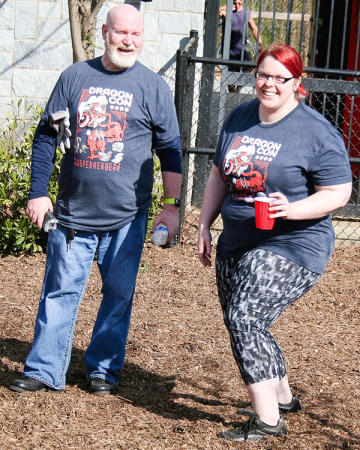 Four years ago, Dragon Con started a new year-round charitable program called Dragon Con Superheroes. In its first three years, the Superheroes contributed nearly 1,900 hours of community service for the Atlanta Community Food Bank, Sweetwater Creek State Park, the Walk to End Lupus Now, the Lymphoma Walk, Piedmont Park, and For the Kid in All of Us.

In 2017, Dragon Con conducted four Superheroes events: a clean-up day at Piedmont Park, a toy drive for Children’s Healthcare of Atlanta, participation in the Walk to End Lupus Now, and working at the Summer Games for the Special Olympics of Georgia, Dragon Con’s 2017 charity. Many Dragon Con fans, friends, and family have participated in these events. Thursday night, the 2017 Superheroes were honored with a reception in the Marriott.

We spoke with a family about why they participate every year. Jacqi and Brian said they got involved in the Superheroes program because they were looking for a way to encourage their daughter, a young teen when they began volunteering. They spoke about a previous event, where they worked at a community garden, and how encouraged they were as not only those who signed up to help were working, but also some neighborhood children came to watch, and eventually pitched in. This encouraged them to continue volunteering for the Superheroes. Jacqi and Brian come back year after year because of the people they’ve met, and those they’ve helped.

Another family duo, Chris and his 12-year-old son Kyle, started participating a couple of years ago, trying to find something they could do together. Kyle said he has fun, and he actively participates as much as he can, such as pushing wheelbarrow loads of mulch around so his dad could do the heavy lifting and shovel it out onto the dog park area of Piedmont Park.

Theresa and her husband Khanh started volunteering with the Superheroes when, after having done volunteer work elsewhere in the past, they were looking for new places and projects to give their time to. Both agree the best part is meeting people with similar interests, and the varied events every year.

Robert Rector, part of the Special Events department of Dragon Con, explained that the program intends to give everyone who wants to have a way to be involved with, and give back to, the Atlanta community at large. The Walk to End Lupus Now was the first event the Superheroes ever did, and it remains a yearly event, while the others change depending on community need.

The refurbishing of the Piedmont Park dog park this year was a particularly popular event, with around 100 people, including many families. Everyone I spoke with mentioned the dog park, where the Superheroes re-mulched the area and refurbished parts of the grounds, doing a considerable amount of upkeep, as the highlight of their time this year. Everyone even said they were positive the dogs knew how much work they had done, and were happy about it.

Rector also spoke very highly of those who participated in the Special Olympics event. Some people dressed up in costume to allow the athletes to “meet a superhero,” while many others helped behind the scenes, passing out drinks, and being a strong support system to the athletes. He was very proud of the work the people who involve themselves in the Superheroes program do, and is thrilled that the Special Events staff could take the time to put on a reception for the volunteers, because it’s very important that those who give their time are recognized.

Brynna Owens is a mild-mannered freelancer by day, but by night, she's working on joining the Justice League. Cutting her teeth on fanfic before she knew there was such a thing (Frodo/Sam based on the books, anyone??), she's been writing since she learned that you put words together and form sentences. Her calling as a Professional Fangirl started with the X-Files, where she honed her writing and editing skills via fanfic that she finally had a name for, and discovered the amazing world of online fandom via IRC and AOL chats. And now, having written that, she feels old! She currently resides just outside Seattle, is owned by a cat named Gandalf, aspires to save the world, and owns over 100 tubes of lipstick.