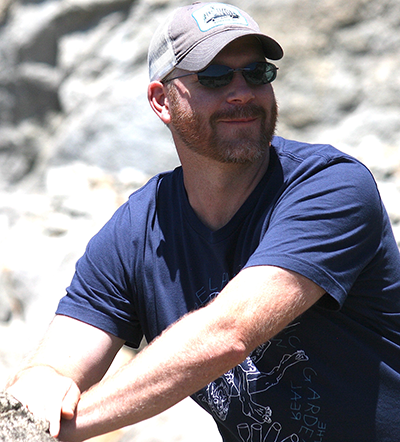 Bible grew up fascinated with the speculative and the macabre. A Bram Stoker Award– nominated novelist, a short story writer, an independent screenwriter, a podcaster, and the  inventor of the Drabble Novel, Jake has entertained thousands with his horror and sci-fi tales for all ages and in several genres. He is the author of the bestselling Z-Burbia series, set in Asheville, NC, the bestselling Salvage Merc One, the Apex Trilogy (Dead Mech, The Americans, Metal and Ash), and the Mega series for Severed Press, as well as the YA zombie novel Little Dead Man, the teen horror novel Intentional Haunting, the middle grade scifi/horror ScareScapes series, and the Reign of Four series, which he calls “medieval space fiction.” As of 2017, he also publishes with Bell Bridge Books and will be releasing three books, starting with Stone Cold Bastards.

Daily Dragon (DD): How many series have you written, and which did you launch first?

Jake Bible (JB): Oh, wow, I’ve written a few. To date, including my middle grade works, I’ve written 11 published series (some still ongoing) with one more on the way. My first series was the Apex Trilogy, which starts with Dead Mech, my zombie apocalypse/mecha mashup.

DD: What inspired this first series?

JB: I wanted to write a zombie novel, but didn’t want to do the same thing as everyone else. So I set it in the far future, hundreds of years after the apocalypse, and asked myself the question, “What would happen if a living mech pilot died in the cockpit while piloting a mech and became a zombie?” The answer was, “A dead mech!”

DD: You write several other series aimed at adults and one middle grade.  Please tell us a little about each of them.

JB: My middle grade scifi/horror series is called ScareScapes and is about young children that wake up on a colony ship to find out that everyone else is still asleep and now they have to run everything by themselves. It doesn’t go well for them, to say the least.

My Kaiju Winter series is about the end of the world as we know it when the Yellowstone caldera blows and out of the hole come giant monsters!

AntiBio is set in a post-antibiotics, future wasteland world where humans live in domed megacities and elite special ops soldiers are the only ones allowed to go from city to city because the strains of super bacteria would wipe out anyone else.

Mega/Team Grendel is a series about a misfit band of ex-Navy Seals, covert ops spooks, and scientists versus Somali pirates, Mexican drug cartels, and psycho mercenaries, all up against giant, genetically engineered megalodon sharks. Fun stuff!

Reign of Four is my telling of the reigns of the English kings Edward I, II, III, and the Black Prince, but interpreted as a sprawling space opera.

Salvage Merc One is my tongue in cheek military scifi adventure series that is the basis for an entire universe that includes several other novels.

Finally, my Roak: Galactic Bounty Hunter series is my homage to the classic crime novels of Richard Stark, John D. MacDonald, and Jim Thompson, but on a sci-fi galactic scale. Space crime!

DD: What do you find are the benefits and the pitfalls of writing connected series?

JB: Continuity. Making sure the new stuff I create doesn’t contradict what I’ve already written. It’s hard. There are directions I want to take sometimes then remember that I can’t because I closed those avenues off in a previous series. Certainly keeps me on my toes.

DD: What was the inspiration for your middle grade series, and what is it about?

JB: I saw a niche that needed to be filled. There really aren’t many horror/sci-fi series out there for middle grade readers (8–11 years old). Most series are fantasy. So I set about writing a series that would make kids the protagonists, but at no point do I go easy on them. The story is set on a colony ship where everyone is placed in deep cryo-sleep for their journey in hopes of finding a new planet for humans to inhabit. Something goes very wrong, and a few of the passengers are awakened to find they have been asleep for a thousand years instead of a hundred. Those passengers also happen to be kids ranging from eight to thirteen.

None of the adults were brought out of cryo-sleep. Unfortunately, or fortunately, a thousand years in cryo-sleep means some physical issues. The kids have to have parts of their bodies outfitted with cybernetic replacements. Part machine, and with only themselves to rely on, they have to run the massive ship and figure out what happened. Then things get very interesting, and scary, as the ship starts to turn on them.

DD: What is the Drabble novel?

JB: That would be my first novel, Dead Mech. It is written entirely in drabbles. Drabbles are 100-word stories. Exactly 100 words, not 99, not 101. I started writing that way as an exercise to get ideas and character sketches down on paper. Then I realized I could actually write in 100-word sections and make an entire novel out of drabbles. It was a massive amount of work, but it taught me a lot about conservation of words. I also had to edit as I went along. Writing that novel that way, which I haven’t done since, prepared me to be the prolific writer I am today.

DD: How did you get into writing screenplays?

JB: My first dream, way back in high school, was to be a filmmaker. I even took a year of film school at my local community college. Of course, back then digital cameras didn’t exist, so I learned on 16mm film cameras. I quickly realized the expense of the process was going to drive me nuts, so I walked away. I came back to screenplays several years ago when friends of mine wanted to enter the local 48 Hour Film Project. I honestly love writing film and television scripts and hope to do so professionally at some point.

DD: What led you to start your podcast, Writing In Suburbia?

JB: Peace of mind. Writing In Suburbia is really me getting thoughts out in audio. It’s my therapy. Plus, I wanted to use what I’ve learned in the publishing business to help others. I think the “myth” of being a writer does more harm than good. Writing In Suburbia helps put that myth to rest by explaining that life as a writer still means mowing the lawn, going grocery shopping, getting kids off to school in the morning. All the normal stuff of life.

DD: Is there a theme that runs through your stand-alone novels?

JB: I think if I have any type of theme, standalone novels or series, it is family. I create characters that have to form tight bonds in order to survive. Whether blood related or by circumstance, no one is going to survive as a lone wolf. Except Roak. That guy doesn’t need anyone. 😉

DD: Do you have any advice for aspiring writers?

JB: More novels! I write a novel a month, so I never stop. Also, I wrote a TV pilot script based on my Z-Burbia series and that is currently being shopped around. Fingers crossed on that one! I’d love to run a show and write for television. TV is the perfect medium for the type of writer I am.

DD: Thanks for your time.

JB: Thank you! I appreciate the opportunity. 🙂

For more information about Jake Bible and his work, visit www.jakebible.com.