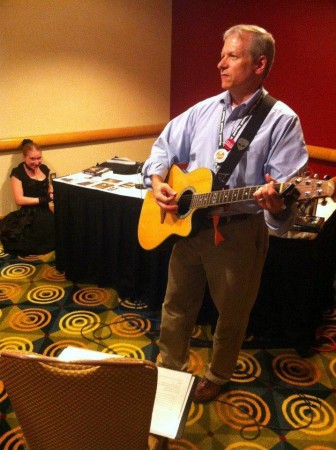 When Gray Rinehart, author, editor, Baen Books Slushmaster General, and singer/songwriter, launched his new book Walking On The Sea of Clouds (WordFire Press, July 26, 2017), he invited all of his friends and provided nerdy music, fun and good food. And, if you missed the launch, you can get a sampling of the associated filk and fun at Dragon Con with performances by Gray himself, and his book-launch entertainers of choice, The Blibbering Humdingers.

On Friday, Gray’s that writer/editor guy, featured on the Sci-fi Literature track panel, “Series Here, Series There: What’s Become of the Standalones?” (Fri 4PM in Embassy A–B, Hyatt). Gray commented, “I’ll be interested to see how the panel about novel series goes since my novel is a standalone. At least it is for now; maybe the panel will convince me to revive the sequel!”

But wait a few hours, and presto, it’s that other Gray, the singer/songwriter, who will be performing at the YA Literature track special event “Princess Alethea’s Traveling Sideshow” (Fri 7PM in A707, Marriott). He added, “I also have a brand new song for Alethea Kontis’s sideshow: a theme song for the sideshow itself! That was a lot of fun to write, since I tried to capture the different elements of the show like the ‘Fairy Tale Rant Theater’ production. Her sideshow is always a fun time—lots of laughs!”

His love for his chosen musical genre is very clear, and hits all the right notes. “I’ll balance old and new material in my solo concert, so even though I don’t have a new CD out this year I’m coming with some never-before-played-at-Dragon-Con songs! And of course I’ll include the favorites that folks always want to hear, like ‘Another Romulan Ale’ and ‘Tauntauns to Glory.’ ‘Tauntauns’ will also be my contribution to the ensemble Star Wars concert—that’s a group concert involving almost all of the Filk Music Track performers, and should be a lot of fun.”

Gray will also perform at the Art Show (Sun 11:30AM, Art Show busking, Exhibit Level, Hyatt). “This will be my second year playing at the entrance to the Art Show—they started that last year, and it went pretty well. It’s generally low-key, and the folks are very nice.”

Gray said, “My [Dragon Con] schedule is pretty heavily weighted toward the musical end of things, but it still hits most of my interests” including writing, literature, and science. In addition to his newly released novel, look for Gray’s short fiction in Analog Science Fiction & Fact, Asimov’s Science Fiction, Orson Scott Card’s Intergalactic Medicine Show, and several anthologies. During his stranger-than-fiction USAF career, Gray commanded a satellite tracking station, “flew” satellites, and refurbished space launch facilities, among other unusual duties. “Sometimes I take the ‘jack of all trades, master of none’ idea a little too far—although for me it’s probably jack of many trades. Or some trades.”

Of his editor role featured at Dragon Con, Gray noted that “My role at the Baen roadshow changes from time to time—sometimes I’m in the background, for support. Sometimes they need me to play a more active role. Earlier this year, I kicked off the roadshow by singing ‘The Books We Call Baen’ and ‘The Monster Hunter Ballad,’ but I anticipate just being available to answer any questions people may have about our submission and review process.”

Wait a minute, I’m getting dizzy. How does he do it all?

Gray admits that his variety of talents can lead to an overflow of options. “Because my interests are so varied, I find it hard to decide what to do when I don’t have my own events or helping out in the Dealers Room with the Baen Books booth. I generally spend some time in one bar or other, sometimes in one party or other, but during most of my down time I hang out in the Filk Music Track, listening to all the great concerts!”