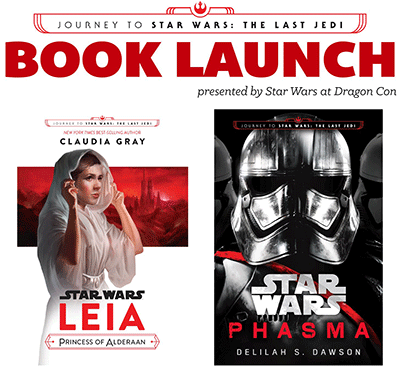 Del Rey Books editor Elizabeth Schaefer introduced authors Delilah S. Dawson and Claudia Gray to a full room of eager Star Wars fans awaiting the Friday night launch of Phasma and Leia, Princess of Alderaan, respectively. While the books were being purchased in the back of the room, Dawson and Gray engaged in a brief Q&A ahead of their signing.

For fear of Lucasfilm lawyers parachuting in to enforce non-disclosure agreements, there wasn’t much either author could reveal about their stories or how they tie in to the larger Star Wars universe. Dawson described Phasma as Star Wars meets Mad Max: Fury Road, while Gray explained that Leia explores how she gets started with the Rebellion. She went on to say that the story can be seen as a bridge between Rogue One and Star Wars: Episode VIII—The Last Jedi. Asked more detailed questions about Phasma, Dawson could only say “Yes.” What part of the question she was answering remained necessarily ambiguous.

Gray assured the audience that Leia is a standalone book, and it is not necessary to read Bloodline (another of Gray’s Star Wars books) first, though those that do will note some common touchpoints between the two stories.

With the limited time and space available, the signings began as soon as a large part of the room had purchased their books, but it was a great way to launch the new titles. Both books are now available for purchase from your favorite online retailer!