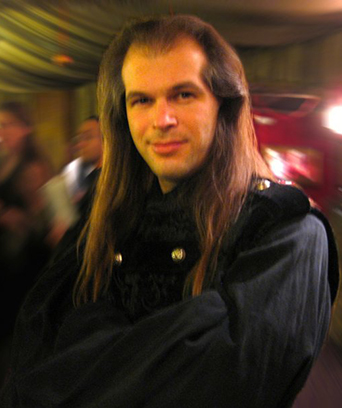 By day, Anthony Francis teaches robots to learn; by night, he writes science fiction and draws comic books. He’s been attending Dragon Con practically forever and sold his first novel, the urban fantasy Frost Moon, from a contact he made in the Writer’s Track. His first steampunk story, “Steampunk Fairy Chick,” is set at a giant convention, and that led to his first steampunk novel, Jeremiah Willstone and the Clockwork Time Machine, which was released earlier this year.

Daily Dragon (DD): What is the Skindancer series, and what inspired it?

DD:  What draws you to Steampunk?

AF: I love the look, the costumes, the maker bent, and that delicious stew of heady nostalgia for the exaggerated glories of the past mixed with the subversive deconstruction of antiquated social structures. When I was a kid, I didn’t like steampunk, but at Dragon Con 2009 I saw so many amazing costumes that I started to ask the question: what if all those crazy, coffee-shooting rayguns actually worked? That led to the tongue-in-cheek story “Steampunk Fairy Chick,” set at a giant convention, and ultimately to Jeremiah Willstone and the Clockwork Time Machine. Ultimately, I imagine all my steampunk stories are hard science fiction hiding under brown and buttons, a world of derring-do and adventure that lets me explore any possible concept with style.

DD: What inspires you to write fiction?

AF: The voices in my head.

More seriously, as a child I was a big fan of Walt Disney movies and Isaac Asimov stories, and one day I put two and two together—movies made me want to tell stories, and Asimov’s writing on writing showed me how. Once I started writing, I got hooked, and now I constantly am spinning stories in my head, which I do my best to write down as soon as humanly possible.

DD: You’ve written a number of short stories in anthologies.  What are the pleasures and the difficulties of writing for a shared volume?

AF: The biggest pleasure is that a call for an anthology can inspire a great story idea you’d never have come up with on your own. My story “Stranded,” in the anthology of the same name, inspired me to return to writing in my space opera universe, and my stories for the anthology Twelve Hours Later inspired an entire new Jeremiah Willstone series. It’s also a great pleasure to meet so many wonderful collaborators!

As for difficulties, I’m verbose, so it’s sometimes hard to make a story fit—but, honestly, writing for an anthology is, like, 1000 times easier than editing or publishing one, so I’m happy to take on writing for anthologies when my schedule permits!

DD: What is Fanu Fiku, and what led you to create it?

AF: f@nu fiku is my webcomic about a young girl with the power to travel between all possible combinations of all possible stories. I was a big fan of webcomics like Megatokyo and Applegeeks and gonzo anime like FLCL, which directly inspired the title (“furi kuri” -> “fanu fiku” -> fan fiction). I had been sketching comics for a while, but once at Anime Weekend Atlanta, I was manning a friend’s booth and someone who saw me drawing there asked for a sketch. I told them I wasn’t an artist, but they insisted—they wanted my sketch. I drew them a character, sold it to them for $10, and started work on f@nu fiku. I kept drawing, even after I broke my arm in a karate match, until some jerk stole the computer that I used to upload the comics—right around the time I sold my first novel—and novels promptly stole all of my time.

DD:  Does your work in computer science feed into your fiction?

AF: Absolutely. For fun, I throw in a new computer technology in the background of each Dakota Frost story (in Frost Moon a puzzled paranormal investigator describes her as “a skeptical witch with a Gmail account”), but it surfaces more clearly in my steampunk and space opera. “Stranded” deals with questions of transhumanism, brain downloading, and replication, whereas my Jeremiah Willstone universe is filled with clockwork robots and human computers with vacuum tubes in their brains. My Jeremiah Willstone story “A Choir of Demons,” which Tony Sarrecchia is currently adapting for audio, was inspired by Alan Turing’s first paper on computable numbers and by my own work on robotics—just add rayguns and derring-do!

DD: You’re a longtime participant in NaNoWriMo [National Novel Writing Month]. Why do you think the program works so well for you?

AF: If you take meeting the challenge of writing 50,000 words in a month seriously, NaNoWriMo cures you of the idea you have to wait for your muse. Almost 1,700 words need to land on the page each day to meet the challenge, and you need to produce them whether you feel inspired or whether you feel well or whether you’re busy. Once I accepted that, I arranged to take off time to write for Nano, to arrange time to make sure I got it done, and to otherwise “be ready.” Nano helped me produce far more words and far, far more interesting ideas than I was coming up with before, and once I succeeded, it was like a drug—I wanted more! I tackle Nano three times a year now—the two Camp Nano challenges in April and August, and the official NaNoWriMo in November—and I think I’ve won something like eighteen times. That’s produced almost a million words that I wouldn’t have without NaNoWriMo, so I work hard to take advantage of it.

DD:  Where do you think writers may run into problems with a program like NaNoWriMo?

Practical reality and psychological resistance. Practically? You have to know yourself. I know a lot of great writers who honestly just don’t have the time, and others require too much structure to take advantage of the process—some require outlines, some rely on research, some have a very iterative process. So Nano may not be for you. Psychologically? I also know some writers don’t take the challenge aspect of it seriously. If you decide to take on Nano, and normally write 1,000 to 5,000 words a month—but aren’t willing to change anything—then you’ll get maybe 2,000 to 10,000 words in that month before you crap out.

Psychological resistance to change is one of the biggest problems I see: authors who want more from their writing, but who are unwilling to change. If you want to win at Nano, you’ve got to be willing to change.

DD: You have a blog post on what you call grimoires.  What are those?

AF: BOOKS THAT KNOW ALL! Seriously: books of secrets, books of technique, books that define a field—big lumbering books that are force multipliers for tough-nut problems. I used to think grimoires didn’t exist, but if you take the time to find them, it can save you days, weeks, even months of time. One of these is sitting next to my laptop while I’m writing this. It’s the Springer Handbook of Robotics, 2nd Edition, and it’s a giant, red, horse-choking tome 2,300 pages long. It’s pricey, but a buddy of mine edited it, so I ordered a copy to support him. This giant doorstop arrived right after I’d spent days trying to fix a robot problem, and when I cracked the book open, it had the solution I wanted in almost the first place I looked. Which books are truly “grimoires” isn’t always obvious—I find them by asking experts what books they learned from. Artificial Intelligence: A Modern Approach is a grimoire, as are the Feynman Lectures on Physics.

DD: Do you have any one bit of advice for aspiring writers?

AF: Write. Just write. Don’t worry about perfection, or getting published, or even about pleasing anyone else: just write. Write to the end of what you start, and only then worry about what to do with it. In fact, don’t even worry about finishing everything—don’t be afraid to try anything. Artists know they need to fill a sketchbook before sitting down to create a masterwork, but writers sometimes get trapped trying to polish their first inspiration into a final product.

Don’t get trapped on the first hill! Whip out your notebook and write. Write morning pages. Write diary at the end of the day. Write a thousand starts to stories, and if one takes flight, run with it with all the abandon you have in you. Accept all writing, especially your own. Just write. Write.

AF: My fourth novel, Jeremiah Willstone and the Clockwork Time Machine, just came out, so I’m planning a book tour. I’m also working with Tony Sarrecchia to release the very first Jeremiah Willstone audio drama, “A Choir of Demons.” Thinking Ink Press is about to release ebooks for the anthologies Twelve Hours Later and Some Time Later; each contains pairs of linked Jeremiah stories.

DD: Thanks for your time.

For more information about Anthony Francis and his work, visit www.dakotafrost.com.