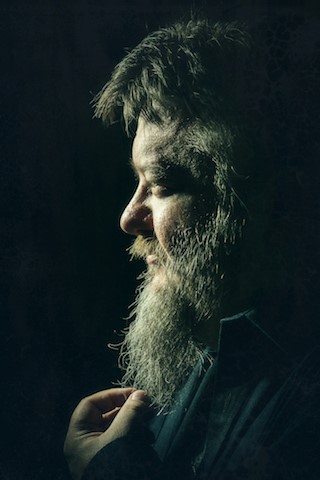 From award-winning author to editor to publisher of Falstaff Books, John G. Hartness knows his way around the book merry-go-round, beginning with his early days as an indie author. And he’s not afraid to tell you what he thinks in colorful, humorous language. The Daily Dragon quizzed John on the many aspects of his expansive career as he prepared for his annual trek to Atlanta from the North Carolina hill country he calls home.

Daily Dragon (DD): You’ve had great success with novels, novellas, and short stories in several different series, including The Black Knight Chronicles, Quincy Harker, Demon Hunter, Bubba the Monster Hunter, and most recently, the Shadow Council Case Files/Quest for Glory storyline (a spin-off from the Quincy Harker universe). What is it about your series, or your style of writing or presentation, that keeps your fans coming back for more?

John G. Hartness (JGH): I think one thing people like about my work is that I work in the lighter end of things, with more comedy built into my work. I’m perfectly happy to go for a laugh, and defuse a tense moment in my books with humor, and there aren’t very many people writing comedy. People like to laugh and have fun, in addition to reading the darker stuff. I take a lot of inspiration from writers like Pratchett, Eddings, Christopher Moore, Jeff Strand, Michael J. Sullivan, and people like that. People like to laugh, and the comedic elements in my work makes me stand out a little bit. Either that, or it’s pure animal magnetism, and I look kinda like a grizzly bear, so maybe that’s it.

DD: What are your most recent publications available for reading now and what can your fans look forward to in the near future?

JGH: I recently released Fireheart, which is my first standalone novel release since The Chosen back in 2010. It’s a YA contemporary fantasy about a teenage girl who runs into (pretty literally) a dragon in the woods between her home and school. There’s a little bit of a love triangle, actually two of them, and a giant millennia-old conspiracy going on. And there’s a dragon! That’s my most recent release.

Later in 2017, there will be three more Bubba in FairyLand novellas, wrapping up that story arc, plus another Quincy Harker novella, which will close out the first half of Quest for Glory. Quest for Glory will continue throughout 2018, with two more Harker and two more Shadow Council novellas. There will be another four Bubba novellas in 2018.

Also in 2017, I’ll release Amazing Grace, which I describe as Aunt Bea from The Andy Griffith Show meets Odd Thomas. It’s about a middle-aged Southern woman in a small town who talks to dead people. Well, all Southerners talk to dead people, but for Lila Grace, they talk back. I also have the final novella of my serialized high fantasy Queen of Kats coming in 2018.

Then there’s the seventh book of The Black Knight Chronicles, which will come out in mid-2018. So there’s a few things going.

DD: You edited the Big Bad horror anthologies for Dark Oak Press and Media. What are the top “lessons learned” from your editing experience?

JGH: There’s a lot more talent out there without much publishing experience than you might expect, and winnowing 300 submissions down to 15 or 20 is really difficult. That, and everything takes twice as long as you’d expect.

DD: Can you share any wisdom gained from your foray into publishing at Falstaff Books?

JGH: People have a ton of talent, and they frequently just need a helping hand to open the door. That’s the whole goal for Falstaff, to open the door for talented people to get their shot.

And don’t announce a publication date until you have the finished manuscript, with completed edits, and a cover, in hand. Because life happens. So stay flexible.

DD: You are also an actor and a poet. How have these talents enhanced your other literary pursuits?

JGH: Being an actor, and reading a lot of Shakespeare and Mamet has helped tremendously in writing dialogue. Reading and directing Shakespeare has taught me how to include exposition and setting into dialogue. Being a poet forced me to write tight, sometimes to my detriment. I tend to drill down to the essence of a story when sometimes it would be better served by a more expansive style. That’s something I’m working on. Poetry also helps me repeat myself less, because my internal thesaurus is always open.

DD: Your writing often focuses on heroes that don’t fit into any established mold. What qualities in a protagonist do you believe contribute to the best heroic characters?

JGH: I think the most interesting people are all broken in some way, and the best ones realize they’re broken, or at least cracked, and are working to fix themselves, and through that, fix the world around them. I like to take the normal protagonist and bend it a few degrees off-axis. It lets me add my brand of humor to the characters, and go to interesting, and sometimes painful places, without necessarily letting the audience know what’s coming. That element of surprise heightens the emotional impact, another trick I learned from directing stage productions.

DD: You include the famous lines from Steve Miller’s 1973 song “The Joker,” “some people call him Maurice” for “he speaks of the pompatus of love” in your biography. Why not also“space cowboy” or “gangster of love” or are they all implied? How do some or all of these famous lines describe you?

JGH: I just got tired of writing the same bio all the time, and wanted to work some comedy into it, so people know right away what they’re getting with me. And I can’t really lay any claim to the “gangster of love,” since I’ve been married for 22 years in December. I’m more like the rock-steady financial advisor of love—always steady, very much anchored, and dependable. I just wanted to inject some comedy into what is so often the driest part of my gig, so in that sense, I am all those nonsensical things that Steve Miller sang about. I’m also the walrus, goo-goo-ga-choo!

DD: You’ve also described some of your intensely personal experiences with regard to the #HoldOnToThe Light initiative. Can you briefly describe the initiative and how it may assist other writers and creative types?

JGH: The #HoldOnToTheLight initiative is the brainchild of author Gail Z. Martin, and is her spin on the Supernatural fandom campaign Always Keep Fighting, and it strives to remove some of the stigma from mental illness and depression within sci-fi/fantasy fandom and life. There is an ongoing collection of blog posts that people can find at www.holdontothelight.com, and they can search the Twitter hashtag to find others. Gail and I, along with Dr. Darin Kennedy and Misty Massey, do a panel at as many cons as we can to tell people our stories, and talk about how we express that in our work, and how it’s nothing that deserves a stigma, that mental illness is a disease or medical condition just like high blood pressure, and there are resources out there, and people should explore those. Sue Phillips with the Sci-Fi Lit Track has put us on a panel here this year called “The Black Dog: Depression and Mental Health in Fiction and Fandom.” Hopefully, some folks will come out and check it out. I’ve dealt with depression my whole life, and I’ve lost friends and family members to suicide, and if I can sit in front of a room and bare my soul for an hour and let someone out there understand that they aren’t alone, and they aren’t crazy, or wrong, or any more broken than the rest of us, then I think I owe that to the people who have helped me when my world was darkest.

DD: You recently discussed on your blog the issue of whether “to get political or not.” Given your statement that “that since my art is part of me, and my beliefs are part of me, that I can no more divorce my beliefs from my work than I can painlessly amputate my own . . ., and am about as likely to do so” and your apparent willingness to face tough political issues, can you comment on the very serious plight of puffins faced with wind farms (see “Birds at Risk”)?

JGH: Puffins are super-cute, but I don’t know anything about them tilting at windmills. Maybe they need a Sancho Panza. I haven’t done any specific research on puffins versus wind turbines, but a quick look makes it seem like there are a lot of birds killed every year by wind turbines. The Audubon Society has an interesting article on their website about new and different ways people are trying to reduce the negative impact this positive energy method is having on the bird population, and I think that’s a good thing. It’s important that we not destroy the inhabitants of the planet while we work to save the planet. That kinda sounded like I’m running for office, which isn’t out of the question in the future. But that’s not an issue that I really know anything about, so I’ll defer to Sancho Panza for all windmill-related questions.

DD: Please tell us about your adventures in podcasting.

JGH: I’ve had several stops and starts in podcasting, mostly centered around a now-defunct podcast called Literate Liquors, where I asked writers to pair alcohol with their works. I enjoyed the interview part, and hating the editing and production part, so that one kinda fell apart. Now I do an interview-style podcast called The Writer’s Journey, where I get folks to talk about how they got to the point in their careers where they currently are, and give advice to new and aspiring writers. I find that everyone’s journey is different, and hearing that there is no one, true path (to steal from Mercedes Lackey’s Valdemar books) is really helpful to folks who haven’t yet found their path to success.

And every two weeks I’m part of the worst adventuring party in the history of role-playing games on the Authors & Dragons podcast. Drew Hayes tries to steer a ship of fools containing me, Rick Gualtieri, Joseph Brassey, Steve Wetherell, and Robert Bevan, while we try to do the absolute opposite of anything logical or sensible. It’s half a dozen comedy fantasy writers all at one place at one time trying to one-up each other on the stupid crap we pull. It’s so much fun, and I look forward to hanging out with those guys every other week on Skype as we play around and behave in completely horrific ways toward NPCs, which may or may not lead to us unleashing ancient demonic evil upon the world. And there’s a bugbear judge that has become the most popular NPC. He’s a much better person than any member of the party.

DD: Where can your fans find you at Dragon Con this year?

JGH: Here’s my panel schedule, and if I’m not there, I’ll be at the lobby bar in the Westin. Feel free to approach, I like to hang out and chat. I drink Miller Lite and Angry Orchard cider, if you feel the need to bring an offering.

Read and hear more about or by John at: