Perceptions change, attitudes change, and the idea of a strong woman is beginning to evolve from a chick in armor so skimpy it wouldn’t protect a flea to a woman who is not afraid to be herself. Take a hint, fellas. We are NOT all the same. Sure, some women are tough and scrappy and wouldn’t shy away from a fight, whether it be with fists or with words. And, yes, some of us are much quieter and gentler of spirit and wouldn’t dream of letting a difference of opinion darken our day. But most of us fit somewhere in between those extremes, a wild and wonderful blend of every aspect imaginable. 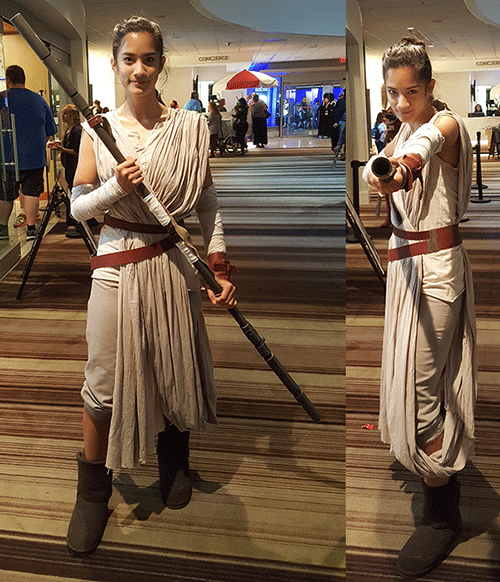 The point is, we are unique, and we need to be seen and understood as a person first, not pigeon-holed by others into their role of a woman. One way to change that outdated perception, ladies, is for us to be ourselves. And we do it with unparalleled gusto at Dragon Con.

Walking through the packed hotels, I saw every aspect of womanhood imaginable: Spartans and stormtroopers, princesses and aliens, superheroes and queens. We’re all here, ready to be appreciated for who we are.

I stopped to chat with one such woman, Mercy McClung. This was her first time at Dragon Con, and on Friday she cosplayed as the tough, Jedi-to-be Rey from Star Wars: The Force Awakens. “I love all of it,” she said about Dragon Con. “Most cons are smaller, so it’s a little hard to get anywhere here, but it’s so nice!” She seems to wield that weapon of hers with expert ease, so perhaps she’ll have less trouble navigating the crowds than the rest of us. Despite her warlike outfit, McClung is sweet and smiling and friendly. As with all of us, there’s more to her than meets the eye.

A little later I saw a woman whose demure magnificence was enough to take my breath away. Wow. What a gloriously beautiful costume from a movie that I have never seen cosplayed at Dragon Con in all my 16 years of attendance. Amelia Liddle was wearing one Evelyn’s outfits from The Fall, a movie that can only be described as an artfully glorious celebration of color, setting, and costume (with the bonus of a great fantasy storyline juxtaposed with heartbreaking reality). Liddle made her costume herself, including the hand-painted flowers and embroidery. It’s a work of art, just like the movie.

As if that wasn’t enough, Liddle came all the way from Great Britain to join us at her very first Dragon Con. Now that takes guts. She’d heard about it from fellow cosplayers. “I think everyone in the cosplay community has heard of Dragon Con. It’s pretty big.” She didn’t come alone, though. “I’m here with a few Norwegians, a few Dutch people, and some more Brits.” She’s amazed at how many different tracks and events there are. “This is unreal how much is going on at one time,” she said. “I’ve never been to a con of this scope.” She said that just one track would be an entire convention in England.

Then I came across a group of ladies who were unafraid to show their playful, mischievous side. These young women chose to dress as Disney pin-ups, adding a bit of spice to the standard fare. Esmerelda (Estelle), Ariel (Andrea), Snow White (Katie), and Jane (Heather) were delightfully impish and having a great time. No weapons here or impractical boob armor that would drive a sword or spear point straight into the wearer’s heart. Yet these ladies were just as strong in their own way, and just as gorgeous.

It’s easy to see that the ladies of Dragon Con know how to show whatever aspect of themselves they’re feeling at the time. You go, girls.