How did a pleasant (dare I say mild-mannered?) professor became the next great creator of superheroes… or is he already? His fans sure think so! And he has me convinced as well. I met with him before Dragon Con to ask about his metamorphosis. 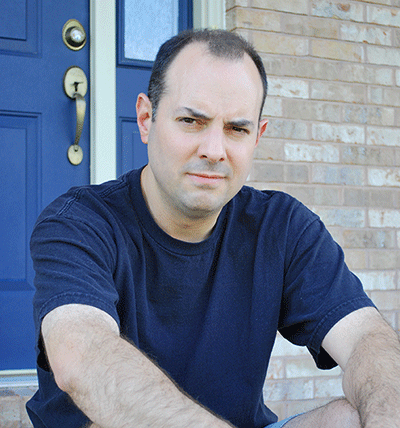 Daily Dragon (DD): Describe the genesis of your Sentinels series and how it just keeps on going.

Van Allen Plexico (VAP): It started way back in the halcyon days of the ’90s when my friend Bobby Politte and I went to see Escape from LA. The movie was horrible, but afterward, he and I sat down at a pizza place and started plotting out a huge storyline involving dozens of superhero characters we were dreaming up. (We sat there for four hours and afterward left the waitress a huge tip for taking up her table so long!) We wrote a whole self-published book of short stories about them, all intertwined like the classic Marvel comics, with guest appearances in each other’s stories, plot crossovers, and so on.

Then the whole thing sat on a shelf for a decade until I started writing professionally. At that point—about eleven years ago—I asked Bobby if he minded if I started writing actual novels using the characters and plots, and he was cool with it. Since then, I’ve written nine full novels and an anthology. They’re also finally coming out on Audible as audiobooks, and there’s even a card game.

DD: How has talented illustrator Chris Kohler contributed to the success of the Sentinels series?

VAP: Chris has been involved from the very start. He’s illustrated every novel—five full-page pictures per book for a total now of 45—plus the last three covers. I can’t imagine the series or the characters without him. We just completed a Kickstarter campaign to produce a large-format hardcover book collecting all of his Sentinels art. I’ll have copies at Dragon Con this year before it goes on sale later this fall.

DD: If I’m a new Sentinels reader, where should I start? At the beginning, or can I pick up a thread at other points in the series?

VAP: It’s probably best to start with book one, When Strikes the Warlord. The story is arranged into three trilogies, but the whole thing moves in a linear fashion from books one through nine. The first trilogy includes the origins of the team and their first clash with their arch-enemy, the Warlord. The second trilogy is a cosmic epic along the lines of a Galactus/Celestials story. The third trilogy was inspired by Marvel’s interstellar conflicts like the Kree-Skrull War. The characters range from street level (like Batman or Spidey) to super-powerful “cosmic” beings like Thor or the Silver Surfer, and everything in between. 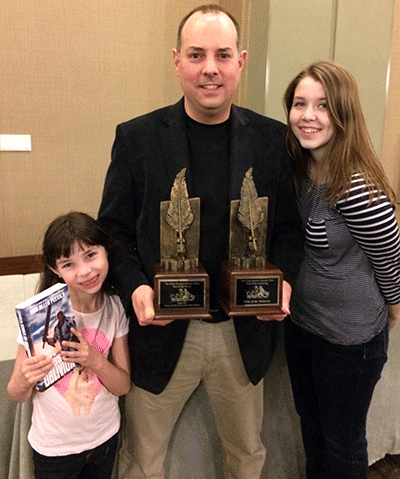 DD: You or your work have been nominated for many awards and won three Pulp Factory Awards, for Pulp Novel of the Year in  2015 and 2017 for Legion III: Kings of Oblivion and Sentinels: The Dark Crusade, respectively, and, as editor of Pride of the Mohicans, for Pulp Anthology of the Year (2015). What qualities of your writing and editing (and the authorial qualities of your anthology contributors) do you believe led to these accolades?

VAP: I’m not really in a position to say why my stuff has won awards when there are so many super-talented writers working today—but I’m glad it has. I’m very proud of the Legion trilogy; it was one of those things that just poured out of my head faster than I could type. The whole series is about 300,000 words long, but I think I wrote it in less than a year. Mainly, I believe it successfully combines an array of compelling characters with the type of big “galactic war” plot (along the lines of Star Wars or Warhammer 40,000) that people tend to get excited about. Winning for a Sentinels book last year was gratifying because it’s not easy to juggle the immense cast that series has built up over the years and keep all the characters busy, while building toward a suitable climax.

As for the anthology, that’s easy: I found four great writers who were excited about Last of the Mohicans and asked them to write prequel stories that happened before that book/movie. They did the hard part; I just had to edit and package it.

DD: You sometimes seem to be channeling the shades of late great authors like James Fenimore Cooper, Arthur Conan Doyle, Robert E. Howard, and Robert Heinlein. How has your work fulfilled the legacies left by renowned adventure writers of the past?

VAP: As an author associated with the “New Pulp Movement,” I’ve enjoyed being asked by publishers on several occasions to write stories using classic characters like Sherlock Holmes and the Griffon. It’s quite a challenge because, even as you’re writing a new story, you’re trying to match up to someone else’s vision rather than creating your own. I leave it to the readers to determine how successful I have been.

DD: I’ve already mentioned your accolades won for new pulp fiction. In your estimation, how does this revitalized genre pay homage to past endeavors and still appeal to modern readers?

VAP: I think the New Pulp Movement takes what was most appealing about classic pulps—things like fast-paced action and adventure, colorful characters and exciting storylines—and brings that storytelling approach to a wide array of contemporary genres, from superheroes to space opera to vigilante crime fighters to monsters and mysteries and everything else. In their day, the pulps were the least expensive and most accessible way to read a story, because they were printed on the cheapest paper available—pulp paper. Today’s pulps are largely coming from small press publishers and are widely available on ebook as well as paperback and audio, so they are also easily available to all readers everywhere.

DD: You are able to switch from short stories to longer form novellas and novels with ease, a challenge for many writers. What’s your secret?

VAP: I think they are two completely different things and as a writer you have to understand that going in. Novels can wind along and meander and be expansive, introducing you to tons of characters and situations. They can take their time. I’ve always described short stories as being like a trained dog: they “do a trick.” A good short story is tight, focused, and has some kind of a kick in the pants for you when you read it to the end. It’s like a well-constructed joke, with a strong payoff at the end and nothing extraneous along the way to distract from that. So it’s just a matter of learning the skills needed to do either thing, like a carpenter knowing how to build both a chair and a table.

DD: Please tell us about your work with comic books, podcasting, and any other works-in-progress. What should your fans look for now or expect to see in the next year?

VAP: I’ve adapted a military space opera story I wrote a couple of years ago into three issues of a comic book miniseries, called Cold Lightning. It’s in production now. Writing for comics requires another completely different skillset. I find it extremely challenging because every single beat, every word, every action has to be carefully timed out, spaced out across each page and across a set number of pages per issue. You have to be technically precise when doing a comics script. I’m very happy with how it came out and I think people will really enjoy it.

The next couple of novels I’ll have out are a stand-alone near-future military sci-fi novel for Pro Se Productions, called Alpha/Omega, and the third novel in my popular Above series that started with Lucian and Baranak, about a pantheon of “cosmic gods” and the SF universe they inhabit. That universe is fun to write in because you get images such as a Thor-like god smashing a big star destroyer-type warship. Fun fun! As for podcasting, my various pop culture commentary and interview shows are all available on the White Rocket Entertainment Network feed, on iTunes and Google Play and at Podbean.com.

DD: You’ve managed to juggle your impressive writing schedule with the demands of family life and an academic career. Can you share how you’ve kept your life in balance while succeeding as an author?

VAP: I suppose it’s just a matter of being so absolutely determined to get stuff written and produced that I am able to summon up the energy to go go go and never (okay, rarely!) slow down. I firmly believe that if there are things that are as important to you as producing this type of quality material is to me, you can always find the time. It’s a matter of priorities and time management, but mostly just a lot of stubborn determination!

DD: Where can Dragon Con attendees and others find more information about you and your work?

VAP: I will be at my table on Artists’ Alley when I’m not doing various panels or hosting Marvel/DC Jeopardy or SF Literature Jeopardy. Last I checked, I was on about 16 panels.

My latest Dragon Con schedule is available at https://plexico.blogspot.com. My website is Plexico.net.