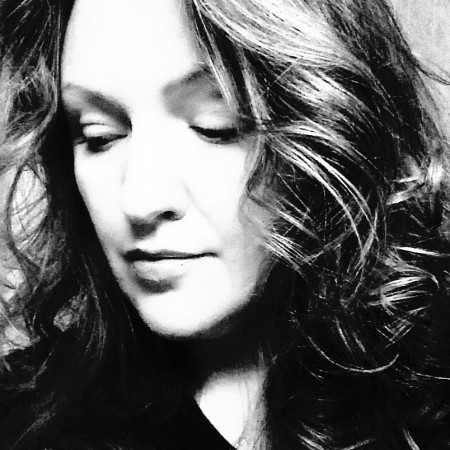 Author Linda Robertson wears multiple creative hats. She writes the Persephone Alcmedi urban fantasy series and the Immanence series and composes music, including a score for the first Immanence novel, Jovienne. A former graphic artist, she has experience in design and layout.  Her love of cosplay at conventions has led her to make costumes of her own, and she works in an office decorated with geek memorabilia.

Daily Dragon (DD): Please tell us about your Circle books and what inspired them.

Linda Robertson (LR): The Persephone Alcmedi series begins after the cultish murder of a wærewolf, when the local High Priestess goads Persephone to not only investigate, but to take action against the murderer … thus launching Seph down the path of Destiny, where she discovers that she is the Lustrata—the witches’ messiah.

As for inspiration, I was sitting in the Louis Armstrong International Airport in New Orleans, waiting on my flight and enjoying a shrimp po’ boy, when I first began the notes for what would become Vicious Circle. I’m not certain if it was the spicy po’boy or that sweltering Southern journey that inspired me, but it was certainly a new beginning.

DD: What’s your background in music?

LR: I took piano lessons from age 8 until I was 14, when the teacher said she couldn’t teach me any longer. Not that she was retiring, and not that I was some virtuoso who’d grown beyond her skill, but because I’d shifted directions. I’d forego the book lessons in favor of random sheet music for songs I’d never heard, and then I’d ignore the time signatures and notations, riffing off the notes, doing fill-ins, and generally rewriting or reworking what was there to suit my mood.

At age 15 I decided I wanted to be in a rock band and begged my parents for a guitar. That summer my dad bought me a Peavey Razor and amplifier from a classified ad. By age 16 I was in a band, and at 17 we became the house band for a local bar, opening for headliner acts and committed to playing every Thursday night. Rock bands are notorious for breaking up, and we were not immune. Fast forward a few years, and I added a keyboard with 16-track built-in recording and over 600 voices to my equipment. I’d always dabbled in writing music, but with that, my compositions began to expand in scope.

DD: How does that tie into your writing?

LR: Music is a staple in my life. It’s almost always playing in the background. When I’m writing, movie scores set the mood, and the melodies quiet the part of my head that can get distracted. But if I’m painting or crafting, it’s rock ‘n’ roll so I can sing along.

DD: What is the Immanence series about?

LR: Jovienne is a strong and courageous 19-year-old, but she’s no valedictorian and she wasn’t raised in an affluent home. She’s grown up in San Francisco’s poverty-stricken Tenderloin, learning how to kill demons, but that doesn’t mean she has her shit together. She makes mistakes. In this dark and often sacrilegious tale, Jovienne is—against her will—remade as one of the abhadhim—the destroying angels—and forced to slay demons for God. Angry, scared, and naïve, she’s just trying to figure out who she is and what she wants, and she’s not sure if she’s on God’s side, or Lucifer’s.

DD: What led you to compose a musical score for the first book?

LR: Well, when a scene became troublesome and the words weren’t there, I could turn to my keyboard and score the scene as I saw it in my head. From there, with the mood and emotion of the scene in the melody, it inspired the words. This past March, with all the pieces in place (meaning ProTools 12, a subscription to EastWest Sounds, and the computer, keyboard, and equipment to run it all) I began taking those compositions and re-working them into a new format to edit, mix, and master. Five weeks later, I’d produced my first CD.

DD: Please explain the process of producing the score.

LR: Utilizing ProTools, I played each track individually on my keyboard. With the EastWest subscription, I could choose the “voice” of each track. Meaning I could make it anything. I could pick a vintage organ or a honky-tonk piano or a Steinway, then, with a few clicks, change it to a violin or three violins or a whole string section of 50 or 60 or 70 instruments. It’s truly an amazing thing to have an orchestra—in whole or in part—at your fingertips.

Once the song is written and all the tracks are set, I equalize and/or filter each individual track to bring out the very best sound, as well as adjusting the volume for key parts. I could even adjust the level of impact for each individual note, taking, for instance, a flute or trumpet from a soft whisper to a blast. After each track is ready, then I listened to the song as a whole and readjusted as needed, then I created a master track and made final adjustments. Saved it all, uploaded the music and the art to the disc service and a few days later, I had CDs.

DD: What experience do you have in graphic arts?

LR: Oh man … I was six credits away from a Visual Communications degree when I landed a great job in the field: Art Director for a local realty company. I created weekly full-page newspaper ads for residential properties and a separate ad for commercial properties, wrote all the copy for those and the monthly half-hour television program, and created a monthly home showcase magazine that featured all the company’s real estate listings. When the realtors found out I could remove the power lines from the photos, patch the grass, remove that ugly car from the driveway, or brighten a room where the flash hadn’t gone off, they were delighted. Then they began asking me to remove the wrinkles from their headshots (laughs).

DD: Do you draw on your artistic background for your writing?

LR: Absolutely! I sketch characters and clothing, I storyboard scenes, draw maps, and sometimes I even merge my housing background to create floorplans. It’s important for recurring locations. It also came in handy when I did the front and back covers, interiors, and face of the CD.

DD:  Your website says you’ve recently gotten into costuming.  What do you enjoy about that?

LR: First and foremost, I enjoy seeing my boys as their heroes. I’m not a great seamstress. My skills are better suited to modifying an existing piece or creating something from pieces of other things. It may be that I’m way too impatient or intimidated to just cut raw fabric and build it from the ground up. I’ve made vests for the boys, but it stresses me so much more to just straight-up sew something. It’s hard, and I applaud those who do it well.

DD: What did you do before you became a published author?

LR: A bit of everything! Aside from being in bands or the aforementioned Advertising Director, I’ve worked retail during the holidays, and I’ve delivered periodicals to those little metal stands outside restaurants and grocery stores. I’ve driven a postal truck and delivered mail. I’ve worked the floor in a dirty factory and moved up to quality control. I was an aide at a nursing home, and a payroll clerk. I’ve been the assistant to the sales staff for a home builder, a Realtor, and I’ve been a bartender at a VFW—those old vets were a hoot! I’ve done whatever I could to keep the bills paid and feed my boys.

DD: Do you have any single piece of advice for aspiring writers?

LR: You are valuable. As a writer/author, your words are valuable. This business is notoriously tough, but if you can make a continual effort to learn and hone the craft, and if you possess the persistence to navigate the ever-changing publishing business, you can make your own path and share your words and your worlds with the rest of us.

LR: I’m developing a newsletter, writing music, and writing. So, if all goes as I hope, there will be three novel releases in 2018: An as-yet untitled second installment in the Immanence series, the long-awaited number seven in the Persephone Alcmedi series, and my first epic fantasy novel. Each should be accompanied by a CD.

LR: Aw, thank you so much for having me! It’s my tenth Dragon Con, and this is a great way to mark what has become my favorite annual trek.

DD: For more information about Linda Robertson and her work, visit www.lindarobertson.com.