A rowdy crew assembled in the Hyatt International North on Saturday afternoon to perform for an equally rambunctious audience. The “Improvised Dungeons and Dragons” (D&D) cast took to the stage and, prior to introductions, verified the absence of any attendees under the age of 18. Once verified, the players on-stage really got into their characters. 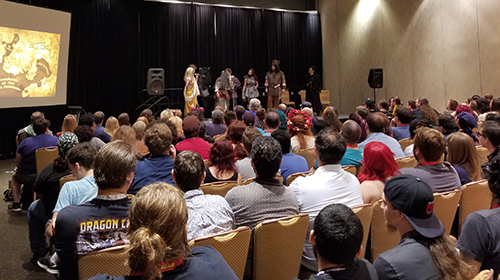 The entire band of adventurers hailed from Dad’s Garage Theatre in Atlanta. They were led by Dungeon Master (DM) Mark Meer, who also performs with Rapid Fire Theatre in Edmonton, Alberta, Canada and is a DM for the “D&D in a Castle” event in the UK. The players introduced themselves. In full character regalia.

Once the characters were established, the story began. Having skipped out on a previous bar tab, the group was brought before the magistrate and were given the choice of death or to go on a quest to rid the town of pesky, hyena-like gnolls and receive some pretty sweet coupons for the tavern. They wisely chose the coupons. Before they left, Krogra shared some of her knowledge of gnolls: that they all have penises.

Off to the mountain home of the gnolls they trekked. Along the way, they were attacked by a ghoul. Greta, who was on watch, just woke the rest of the party before she was paralyzed by the touch of the foul creature. Loosanus turned tail and ran away. Breitbart attacked but instead was poked in the eyes by the ghoul, and also became paralyzed. Fallopian stepped in and talked to the ghoul, noting the waves of sadness coming from the vile creature. Her cure wounds attempt kept the ghoul occupied while Loosanus appeared from behind the ghoul and killed him. Loosanus found the ghouls wallet with 16, no make that 9, pieces of gold and an expired driver’s license.

Moving further along the way, the group finally found the gnoll camps. Loosanus used his tail as an improvised penis and attempted to bluff his way into the prince of the gnolls’ inner circle. Fortunately, his weak story checked out and he was allowed in. He bargained with the Prince to bring in the rest of his party as sacrifices. The party watched as the Prince called forth a demon who could consume everything. During idle chit chat, Loosanus learned about an upcoming wedding and suggested they could possibly enjoy the Chicken Dance during the reception. This set off the Tiefling leader as he mentioned the gnolls hate polka. Fallopian took this opportunity to wreak havoc by singing the Chicken Dance song. The demon ate all the gnolls, accomplishing the mission. Unfortunately, there was no loot to be had.

After a brief celebratory jaunt into hell where Loosanus again had to bluff to get the party returned, they ended up back in the magistrate’s office. They announced the town was rid of the gnolls and asked for their coupons. Dane questioned the validity of coupons as payment and was swiftly struck down by Loosanus, securing the coupons for the group and thus finishing the campaign.

For more Improvised Dungeons & Dragons, Dad’s Garage Theatre has a 6–8 week run annually with this format.