Saturday afternoon’s wonderful panel from Supernatural, moderated by Tony Gowell, filled 2,000 seats in the Marriott Atrium Ballroom. Samantha Smith, DJ Qualls, Kim Rhodes, and Sebastian Roche were listed for this panel. Guests were thrilled with a surprise guest—Ruth Connell. Everyone noticed right off the bat how close these cast members were.

Qualls decided at the beginning of the Q&A that each person asking a question had to give their first name and pick a number from 1 to 100. The winner that was closest to the number he won would win an 18k toothbrush, which he produced from the book bag he was carrying. 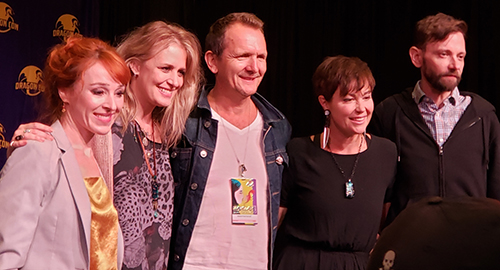 One of the first questions asked was about Wayward Sisters. Rhodes addressed this question. She stated that a pilot was made all because of the fans, which was the first time that had ever happened. Although the pilot was made, it was not picked up and there will not be a revisit to it.

Smith commented on how the writers did a fantastic job of introducing new characters. It was never dull or boring. The new characters were brought on board with finesse and a bang. They were full of life and blended well with the story line.

One of the secrets the audience learned was about the jackets. Every time Sam or Dean (or anyone else) pulled something out from the inside of their jacket, there was actually a hole all the way through. The bottom of the jacket was never shown on screen. Why? It was because there was a staffer down low passing the item up through the hole for them to “pull out of their pocket.” This way, the jacket was never bogged down with props. Now you can go back and notice this on the episodes.

Another question asked was about how they felt when they saw their character cosplayed. All of them loved it. In fact, at a con, Connell was mistaken for someone cosplaying Rowena. She said she was really flattered since she didn’t even have to try.

Out of the entire panel, Qualls told the audience he originally turned down the role. He felt that since Sam and Dean were so good-looking that he would never be able to measure up to that. Jensen came to the rescue and talked him into taking the role, since it was written for him, after all. Obviously he did, and he is now grateful he did. A con in Birmingham was the turning point for him. It made him realize how strong the fandom was. Qualls said the outpouring of love and respect he as received from fans has been wonderful and has helped him tremendously.

This was one of the fastest hours at Dragon Con. Even though all good things have to end, the fans were grateful that this amazing cast came to Dragon Con and shared their stories.