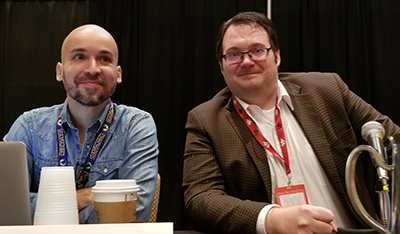 Fans crowded into Centennial I on Sunday afternoon in the Hyatt to preview Dan dos Santos’s illustrations for the 10th anniversary edition of Brandon Sanderson’s Warbreaker. Sanderson said he fell in love with Santos’s work and asked for him to illustrate the book. Santos has done such a fantastic job that Sanderson has dubbed him Dandos the Oilsworn. The anniversary edition will be leather bound and contain several of Santos’s gorgeous illustrations and is a project that Sanderson is doing independently, with the permission of his publisher. The book will have some corrections for continuity purposes but will contain the same story as the original novel—plus some fabulous new artwork—and should be ready for Christmas.

Santos treated fans to a movie of him drawing and painting the cover art for Warbreaker. He also showed slides of rough sketches and concept art for the new edition. Santos does the sketches digitally in Photoshop, then paints the final works in oil. Warbreaker was the first cover of Sanderson’s books that was done in a real medium, not digitally.

Santos explained that he tries to visualize scenes in a way that isn’t too literal. Sanderson’s world is so big, and Santos has to find a way to show the magic system. “I think you can’t really capture it if you try to be too literal,” he said. “You have to… push things to a dream-like state to really get the essence and the flavor of the characters and the magic of the world.” The gasps of awe and bursts of applause make it clear that he succeeded.