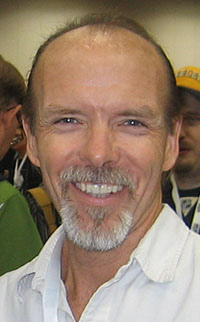 Author Chris A. Jackson has been a professional and scientist and is a lifelong gamer. He’s also a natural roamer. He and his wife split their time between the North Carolina mountains and the Caribbean. His Weapon of Flesh series about a magical assassin has made the Kindle bestseller list several times, but he also writes horror, satirical science fiction, and pirate tales in addition to short fiction.

Daily Dragon (DD): Why did you first start writing?

Chris A. Jackson (CAJ): I blame my mother, actually. She taught me at a very young age that books were cooler than TV. I began writing in college, took a course in short story writing, and hated how the course was structured. I didn’t write after that for years. Then, after completing a long “home brew” Dungeons and Dragons (D&D) campaign for friends in grad school, I had this amazing story, great characters, all the world source materials, a pantheon I’d created, etc., and didn’t want to give it up. So my wife Anne and I decided to write it. It was very rough but turned into a trilogy. It wasn’t published, but it got me writing. After half a million words, you’ve pretty much found your voice. The rest is history.

DD: Your website says you’re a gamer. Which games do you most enjoy, and how do they relate to your writing?

CAJ: I’ve played tabletop role-playing games (RPGs) since high school. I currently enjoy Pathfinder, several of the Arkham Horror board games, Shadowrun, Starfinder, Traveller, and a few others. I’ve been privileged to write tie-in fiction for most of those games, which was a fabulous treat.

My first game-related deal was with Paizo Publishing, writing pirate stories for the Pathfinder Tales line. Creating original, unique, and fun characters in these worlds, and working with some of the best editors in the business, has been the greatest experience of my life. Currently, I’m also playing a lot of computer games. Skyrim is my favorite, and I’ve spent far too many hours playing it. That’s yet another world I’d love to write in!

DD: What draws you to gaming?

CAJ: Without a doubt, the camaraderie. I play with close friends, for the most part. We play for fun, not for “rules” or even for the love of the worlds we play in. I also love creating characters, and we get pretty weird sometimes. Fun, laughs, tears, food, and drink with my best friends… What could be better?

There’s also the storytelling aspect. I get to create puzzles and mysteries, foes and villains, conspiracies and evil plans to conquer the world. Also, way too much fun!

CAJ: It began as an experiment to see if I could be funny. I wanted very badly to write satire, just to poke fun at many serious subjects, specifically the “War on Drugs.” What better idea than creating a future where Earth is relegated to the status of a third-world dump, and our only export is a controlled substance, cheese, of course.

Initially, I wrote it a chapter at a time with no idea where the story would go, and posted it on a shared website for reader feedback. So many people liked it that I decided to finish the story arc with two follow-up novellas. I was then very lucky to meet Jeffrey Breslauer, a wonderful actor who does voice work, and we worked together on the audiobooks. I still hear my characters in his voices.

DD: Please tell us about your background as a professional sailor.

CAJ: I pretty much grew up at sea. From about eleven years old, I spent every summer working with my father as a commercial fisherman. I loved the amazing beauty, danger, majesty, and power of the sea from the first. My wife and I decided to quit our careers and sail for a few years, and I took classes for a 100-ton masters license, just in case we wanted to do charter work. We did some, and enjoyed it, but then the writing gig took off. I’ve now got the best of both worlds, writing sailing stories while actually sailing the Caribbean. It’s not all easy, but we both love it.

DD: How did you use these experiences in your Scimitar Seas books?

CAJ: I actually put off writing nautical fantasy for a long time, but then realized I was wasting a vast reservoir of personal experiences. I jumped into the series with Scimitar Moon, and promptly realized I was delving far too deeply into “nautical jargon.” I had to pull back a lot, and, once I sold the story to Dragon Moon Press, worked with a great editor (who had no knowledge of boats) to reach a happy medium of information, realism, and sea action. We won a gold medal from Foreward Reviews for best fantasy novel of the year, and two more for the second and third books in the series. Never been done before or since. That was the door that opened up many more “pirate” stories.

DD: Your bio describes you as a lifelong roamer. Please tell us a bit about that.

CAJ: Well, I never seem to be comfortable in one place very long. That, more than anything, is why sailing and writing full-time is such a fulfilling life for me. New sights, sounds, languages, people, food, customs… Most people don’t see or experience the things we have. We’ve swum with sharks and eagle rays, dived into mountaintop lakes, climbed volcanoes, and eaten things that most people would never dream of eating (termites, for instance). Life is so much more interesting exploring new horizons.

DD: What’s your background in science?

CAJ: Well, I’ve been a biologist most of my life as well as a sailor. I fell in love with marine biology at a very young age and got my bachelor’s degree in biology. Grad school, however, taught me that I didn’t really want a PhD. They don’t let you do the fun stuff anymore. From there, I worked in biomedical research for almost twenty-five years, and even ended up teaching. Yes, teaching medical students without a medical degree! I’ve used a lot of my science background in my writing, actually, especially writing realistic injuries. The human body is both fragile and incredibly resilient. I’m also in love with the notion of human genetic manipulation…in a science fiction setting, of course.

DD: Why do you enjoy writing fantasy?

CAJ: Well, probably due to my early exposure to Dungeons and Dragons. Before that, I was a hard SF fan, but then I got into reading tales of magic and monsters, warriors and romance, and fell in love. As a writer, I guess my creative energies were more stimulated by that genre. I can create more, without having to delve into subjects which are not my forte, like astrophysics or engineering. It gives me more creative freedom, I guess. I have since written SF and Horror, but fantasy is my first love.

DD: Who is Lad, and what inspired you to create him?

CAJ: Lad is the primary protagonist of the Weapon of Flesh series. That entire series was inspired by a single line from Conan the Barbarian. That line is the “Riddle of Steel.” “Steel is not strong. Flesh is stronger.” So I created a weapon from flesh, someone so skilled that he does not need a weapon, but is one.

Lad is a creation of magic and flesh, imbued with strength and speed and inured to injury and pain, but all of his emotions are also suppressed by that very same magic. He is an assassin’s perfect weapon, knowing nothing of right or wrong, good or bad, trained only to kill. He’s the perfectly naïve yet incredibly powerful character, so naïve in fact that he doesn’t even have a name until he chooses one for himself. Of course, his entire life changes when someone tells him that killing is a bad thing.

DD: Do you have any advice for beginning writers?

CAJ: Ha! More than is often welcome, actually, but if I had to give one golden nugget, it would be this: Write what you love, carve yourself out a niche, and enjoy yourself. If you do anything less, you will miss the point of being a writer: doing what we love and earning a living at it.

DD: What’s your latest release, and what’s next for you?

CAJ: I just finished the second book of a new nautical fantasy series, the Blood Sea Tales. This is a slightly more gritty and adult series for me, and the feedback I’m receiving is, so far, very good. The protagonist is much more “morally gray” than most I’ve done, and the environment is much darker and more dangerous. The first in the series, The Pirate’s Scourge, released in 2018, and The Pirate’s Truth just released this May. The third, The Pirate’s Bane, will release this winter.

Next, I have a three-book series of “Urban SF” from Falstaff Books, “The Dragons of Boston.” Dragon Dreams is out now, and the series will continue with book two, “Dragon’s Nemesis” next spring. I also have two novels currently out on submission, one with an agent and one over the transom. Oh, and I’m writing tie-in stories for Paizo’s web-fiction blog, and for a series of hard-boiled spy-fantasy stories–think James Bond meets Cthulhu. Most of all, I’m having fun doing what I love.

DD: For more information about Chris A. Jackson and his work, visit his social media sites: