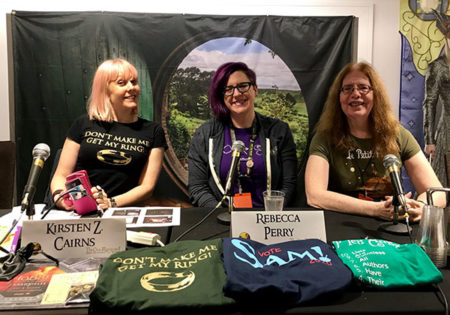 A standing room only crowd poured into the High Fantasy track room in the Marriott (L401-403) to hear the latest on the highly anticipated and much talked about Lord of the Rings television series coming to Amazon Prime. Kirsten Z. Cairns (Greendragon) of The One Ring.net (TORN), Rebecca Perry, Constance Wagner, and Jim Wert took the crowd through a brief retrospective of TORN, which is celebrating it’s 20th anniversary, and then turned to what we know and don’t know about the series.

Amazon purchased the rights to Lord of the Rings in 2017 for $250 million and anticipate a series budget of more than $1 billion. Everything, however, involving rights to Tolkien properties is complicated. The rights Amazon purchased are limited to material that’s already available, essentially The Hobbit and The Lord of the Rings. The holders of those rights include three entities: The Tolkien estate, UK publishing house Harper Collins, and Middle Earth Enterprises (Saul Zants’ company). Cairns pointed out that all three are very protective of Tolkien’s work, which gives her comfort, but that doesn’t make the legal and contractual situation any easier to manage. This complex ownership structure will have implications on the production as each entity has the right to review and either approve or veto every script. As a licensee of Middle Earth Enterprises, TORN was recently able to reach out to them for an update on script reviews and approvals. The word came back that Middle Earth Enterprises hadn’t reviewed a single script. This is a bit ominous given that the purchase agreement requires production to begin by October 2019 or the deal is null and void. Cairns fully expects production of some sort to begin by the deadline.

When the first season launches, it will include twenty episodes and planning calls for the series to run for five seasons. The focus of the series will be on the Second Age, which includes the realm of Numenor and the rise of Sauron. The writers must adhere to the essential timeline and major events of the age but they are allowed to develop stories with the framework provided by Tolkien. The key to this is the fact that the writers will be dependent upon the appendices found in The Lord of the Rings.

The panel confirmed that filming will occur in New Zealand. This immediately raised the question of the visual relationship the series will have to Peter Jackson’s film adaptation. WETA workshop, the award-winning production shop fundamental to Jackson’s films, has expressed a clear desire to be involved. While WETA’s involvement is still an open question, there are at least two direct connections to Jackson’s work. Artist John Howe has signed onto the series team as has Brian Sibley, who will serve as a consultant.

Much of the writing and production staff has already been named. The panelists pointed out that while they have very solid credentials with credits across very successful television and film franchises including Stranger Things, Game of Thrones, and Star Wars, there is very little experience among them in high fantasy. There is, however, some comfort in the fact that Tom Shippey, a distinguished and widely published Tolkien scholar, will serve as an advisor to the series.

As for the direction the series will take, the panelists agreed that the one thread running through the Second Age is the rise of Sauron, the great evil force of The Lord of the Rings. As such they are confident his story will be fundamental. Sauron will be an attractive, charismatic, and charming figure who will be seductive, patient, and powerful. There will be new stories written though, and we can expect the world to be fleshed out, and it is possible the stories could carry into the Third Age with a young Aragorn. Again, the key to all this is the writers and producers’ access to the appendices, and we will have to wait and see how deeply they are mined. If the crowd attending the panel and their interest is any indication, Amazon’s The Lord of the Rings series has a ready-made audience and a hit in the making.