In 1984, Ralph Macchio, as Daniel LaRusso in The Karate Kid, lifted his arms sky high, assuming “the crane” stance, and face-kicked his nemesis, the bully known as Johnny Lawrence, played by William Zabka. We all cheered. Our hero prevailed, getting the trophy and the girl. Good bested evil. 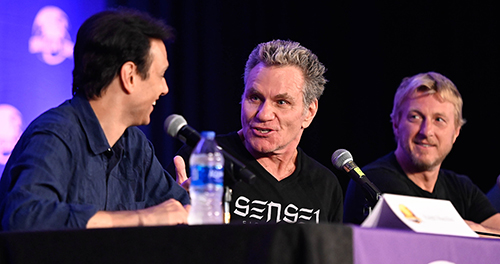 Fast forward thirty-some-odd years to a little show called How I Met Your Mother, where Barney Stinson began to chip away at our perception of The Karate Kid, singlehandedly forcing us all to question our allegiance to Daniel/Macchio. As our Karate Kid—as the Karate Kid. Macchio and Zabka, both charming, good-natured guys played along, guest-appearing on the show as a part of the “gag,” but the wheels started to turn. What if we got it wrong, and Johnny was the hero all along?

And so, Cobra Kai was born. Streaming on YouTube Premium, Macchio and Zabka reprise their roles—and their infamous rivalry—picking up 34 years after the events of the film alongside Martin Kove, who returns as sensei John Kreese. Cobra Kai explores the gray area around the characters, showing that Johnny was never 100% corrupt and Daniel never 100% faultless. The result is a deeply human look at a beloved story with a nostalgic overlay using humor and heart.

Macchio, Zabka, and Kove—who have undeniable chemistry and friendship—brought that same humanity, humor, and heart to the Sheraton Grand Ballroom A–F Sunday afternoon to dish on how they dusted off old characters with fresh perspectives, re-learned some old moves, and honored the memory of the late Pat Morita, also known as Mr. Miyagi.

As superfans of the films, Hurwitz, Schlossberg, and Heald are able to write a show, they think, other fans and younger generations want to see. They also had the wherewithal to ask “What happened to Johnny Lawrence?” and write from that perspective. Macchio thinks it paid off, as they have managed to create a show that balances nostalgia with current culture and relevancy, making it work on “all cylinders.” Kove also credited the creators as geniuses for pulling The Karate Kid outtake footage from archives for use in “flashback” sequences in Cobra Kai.

Zabka, who’s an Academy Award–nominated filmmaker, said he’s enjoying the new appreciation for Johnny Lawrence. For 35 years people never hesitated to approach him in public to tell him they hated him. Now he hears that Johnny’s kinda cool. “So it’s nice,” he said.

In 1984, none of the actors had previous martial arts experience and began training five weeks before the original film. Macchio joked that he was an off-white belt, or an “eggshell” or “almond”, at the end of the training who could kick a little. Kove said that their trainer and choreographer, Pat Johnson, was key to their success: “We owe him a great deal.”

Zabka recounted how the final, storied fight sequence—where Daniel does the crane kick to Johnny’s face despite being injured, winning the tournament—took three solid months of rehearsal. Macchio and Zabka started with pads on their hands and feet and progressed from there. While Zabka studied karate and Tang Soo Do several years after the film, he eventually stopped. For both Macchio and Zabka, picking it back up for Cobra Kai has also been a crash course in recovering from sore muscles.

But, Zabka emphasized that Karate is not about being a badass, saying that you learn it to learn respect and humility. He said that since he started practicing martial arts, he’s never once been in a fight.

“To be a good leader, you have to be a good servant,” he said. “You have to a good, humble person. You gotta be a good follower of the right people.”

When asked what they struggled with on the show and also what they want to maintain from the film, Macchio was quick to say, “I have to have Miyagi’s essence peppered throughout the series somehow and keep that legacy.” He then added, “And that’s something they’ve done. And I think it’s important to the show, certainly for the LaRusso character and the whole series because he’s such a big part of that original film. I don’t think we would be making Cobra Kai if not for Mr. Miyagi.”

“Conversely, the thing that I struggle with the most was, sorta, um, LaRussso, being so arrogant, at times, and so overly, oh, full of himself, antagonistic.” Macchio talked about how prominent this was in the beginning of the show, but also how it works within the larger context, especially coming from Johnny’s perspective and within the framework of exploring character flaws. It is what will give the show longevity.

Zabka joked that when he was first approached he didn’t want to do Cobra Kai if it was just a set-up for him to take another kick in the face. Being more serious, he didn’t want to “double down on the perception of yesterday” and said that when the show was pitched to him like a Bad Santa he was on board.

Several times Kove jumped on the flawed character bandwagon, always answering that Kreese too “is somewhat misunderstood” while also quoting his most famous line, with a gruff and a growl, that “mercy is for the weak.” But, he also pointed out that The Karate Kid holds one of those coveted “must-watch” places in our society. “I always tune in. It’s like The Godfather. You always tune in to The Godfather. You can’t turn The Godfather off.”

And yet, all three seemed to prefer to keep it light. When asked questions about who would win in a fight, they always answered themselves/their characters. In one instance, Macchio was challenged to name his toughest opponent from all three Karate Kid films. Zabka worked hard to put himself in Macchio’s line of sight, leaning back exaggeratedly, then forward, and then sideways, gazing intently. The room went eerily silent, which Macchio noted. Pressure on.

“Of course,” Macchio finally said, relieving the anticipation, “it has to Johnny Lawrence. Because the fight was the best one. The payoff was the best one. The intensity of it I’ll never forget, maybe, as an actor. I’ll never forget shooting that scene. The excitement of shooting that, that, you know, that scene with the crowd there. I remember it, where the others kinda blur together as another fight. It’ll always be… you know, that’s always the pinnacle fight, that first tournament fight. Johnny Lawrence and Daniel LaRusso had the staying power well beyond the others.”

Naturally, Zabka agreed, and he circled back, as well, to the importance of Mr. Miyagi. “[He] in a way saved Johnny, you know. He liberated all of them. Johnny was under the spell of Kreese, from 10 to whatever, 18. This guy was his Master.”

Kove talked about how Kreese sees karate as an offensive sport while Mr. Miyagi saw it as a defensive art, and how these varying philosophies made tremendously different impacts on the characters of Daniel and Johnny, which is why there is always tension, even now in Cobra Kai, between the two.

“The core of them are very similar, but their upbringings and their senseis,” Zabka said, “come from totally different worlds.”

When Ali, played by Elisabeth Shue in The Karate Kid, came up and the room became buzzy about a possible return, Zabka was tight-lipped. But season 3 begins filming tomorrow, so fans won’t have to wait long to find out.

Macchio, Kove, and Zabka. Jokesters. Nice guys. Humble humans, even pointing out a young Cobra Kai cast member sitting in the audience (Owen Morgan, who plays Bert) and chalking up continuity errors in the original film to Mr. Miyagi simply being a master.

And, Cobra Kai and The Karate Kid. Flawed characters. Flipped allegiance. From antagonist to protagonist. Pop culture is often debated, but has it ever been so questioned by pop culture itself that it gets a chance to rewrite its own mythology? This may be a first. And, at the end of it, will the real Karate Kid please stand up?

Kelly McCorkendale is a dog-lover, avid quilter, and occasional creative writer who loves the color orange and boycotts cable (except Game of Thrones because, well, what if winter is coming!?). After college, she realized poets weren’t in demand, so she shipped off to Madagascar with Peace Corps. Since then, she’s found a niche working on health systems in Africa but has a long-list of life tasks yet to be fulfilled--such as perform blackmail, learn a trade, and become a competitive eater. She has an MA in International Education, believes rice is the elixir of life, and, in high school, won the best supporting actress honor for the state of Missouri. She may also recite poetry (her first love) when imbibing in alcohol.