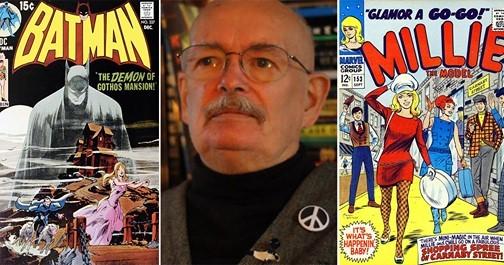 Gordon opened the panel by quoting the beginning of the first chapter of O’Neil’s Writing Comics the DC Way, which describes the effects of telling a successful story. He then asked the panelists to share their first impressions of O’Neil and his work. Chaykin had been reading comics since age four and so knew O’Neil’s stories but first interacted with him on a subway ride back from Neil Adams’s house. Chaykin credited O’Neil with teaching him how to use the limited real estate on a comics page to the greatest effect. Augustyn added that every page had to include something that moved the story forward.

Discussing O’Neil as a writer, Levitz said he was very plot-focused, with structured story ideas. As with a newspaper, each page had only so much space, and the writers had to use it well. Kochman added that O’Neil focused on deadlines and commitments but also cared about craft and story.

Augustyn described growing up in the 1960s and becoming hooked on comics early in the decade. When he was thirteen or fourteen, O’Neil and Adams became the creative team on Batman. They infused the book with a more adult viewpoint, and comics started to grow up. Citing the O’Neil/Adams Green Lantern/Green Arrow as an example, he said that comics began to address issues. Augustyn joined DC Comics in the late 1980s as a junior or associate editor, and O’Neil, whom he described as patient and laid back, taught him how to place word balloons on pages. O’Neil, who had a journalism background, also taught him to be direct and not overly complicated and to follow consistent rules within a story. When Augustyn and Mark Waid collaborated on a Bruce Wayne story set before Bruce became Batman, O’Neil told them the entire story was a flashback, so they couldn’t use any flashbacks within it. They were able to find a way to tell the story without doing that.

Augustyn said the principles O’Neil imparted to him still inform his work now and were not limited to comics. For example, any conversation that’s just two talking heads shouldn’t go more than two pages unless the story is literally about the talking heads.

Gaska said he grew up reading Marvel, not DC, and first encountered O’Neil when Gaska took his class on writing for comics at the School of Visual Arts. When his family’s situation left him without the funds to continue school, O’Neil tutored him outside class at no charge. It was okay to break the rules, according to O’Neil, but only if the writer understood the rule first.

Augustyn and Gordon agreed that O’Neil’s characterization was the definitive version of Batman. O’Neil also wrote The Question and Justice League of America, along with many other titles at both DC and Marvel.

Levitz first noticed O’Neil’s work when O’Neil replaced Gardner Fox on Justice League of America. Fox was a traditional writer with a specific approach, and the change in storytelling style drew then-eleven-year-old Levitz to find out who this new writer was. They actually met for the first time when Levitz joined DC Comics in 1971. He described O’Neil’s editorial style as very structural as a result of his newspaper background and his approach as very professional. The books featuring Batman were able to do long, complicated crossovers on a tight schedule because O’Neil required the same professionalism and respect for deadlines from the editors and creative teams who worked under him.

Kochman said he was stunned when he discovered that his all-time favorite comic book, Shazam! #1, was written by O’Neil. He had owned the comic for years before that. He met O’Neil when he joined DC Comics in January of 1993. They occasionally had hallway chats, which gradually grew longer and evolved into a friendship. He described O’Neil as very generous and easy to talk to. Like Levitz and Gaska, he considered O’Neil a mentor. O’Neil taught Levitz how to get rid of unnecessary words and tell the story effectively.

Kochman said O’Neil believed in hiring well and then getting out of the way. O’Neil wasn’t one to dig into the minutiae of a story, preferring to focus on the big-picture concepts. He had a knack for assembling creative teams who worked well together and was very focused on what needed to be said and what could be left to the art. He believed the writer should make things clear for the artist. Gaska added that O’Neil wasn’t fond of what was then the Marvel style of storytelling, which left many story details up to the artist.

O’Neil was also very socially conscious, as shown by his work on Green Lantern/Green Arrow. The last time Kochman saw him, he had a Peace button on his lapel. Gordon said his efforts seemed designed to have writers use their platforms to push the world to become a better, more just place.