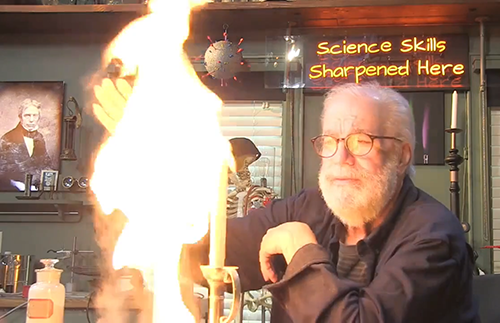 Hold onto your wizard hats, Dragon Con! Let’s blow stuff up with the magic of science! That’s exactly what Jake (Wizard IV) did during the panel “Science Demos Too Dangerous for Dragon Con,” Monday at 8:30AM on the Main Events channel. Assisted by Deuce and R.J., Jake proceeded to amaze viewers with his awesome (and dangerous enough to be banned at Dragon Con) chemistry demonstrations.

Jake began his display by tossing Lycopodium powder onto a candle flame, causing a burst of flame dazzling enough to impress any but the most hardened skeptic. The science behind this bit of magic is quite mundane, however. It’s just finely ground spores (or wood like cedar) that will cause a dust explosion when ignited, the same way a silo explodes. To prove it, Jake and Deuce put the dust and a candle in a closed paint can. Boom!

Nitric Acid and an old penny followed, but Jake warned viewers not to try any of these experiments at home. Nitric acid is “nasty,” he warned. The reaction between the acid and penny forms nitrogen dioxide, which is deadly if breathed and turns back into nitric acid in the lungs. Jake left while the dangerous fumes were sucked out of the room. When it was safe, he came back in and voila—a bright, shiny penny.

Viewers were treated to ten different chemical delights, including a fire tornado, a ball of flame shooting through a transparent tube and popping out the far end, an uncanny candle made of a red-hot penny suspended above acetone (the penny will keep glowing), and one of my favorites, a “dragon belch” (exploding methane). Jake bubbled the methane through some soapy water, forming a tall column of methane bubbles. After slicing off a stack of the bubbles, J.R. touched them with a lighter. Kablam! “Fire good,” Jake said with a grin.

Jake also formed what he called dragon ash, an appropriately weird structure, by igniting mercury (II) thiocyanate. Predictably (if you look carefully at the chemical name), the reaction forms cyanide gas, so Jake wisely left the room during the reaction. (Don’t attempt this one at home, either. Jake warned that he’d find you. Best not to annoy a wizard.)

Other scientific escapades included a demonstration of the effect of a vacuum on a human head using a doll and shaving cream (Ew!), and the grand finale—exploding a watermelon from the inside using a balloon. Okay, a little more than a balloon. He also employed a tank of oxygen and an electric ignitor. Bam! Watermelon everywhere!

You can find more exciting science at the Midnight Science Club. 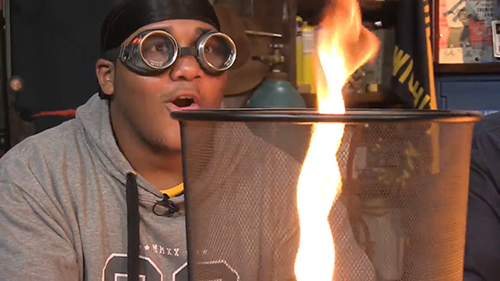 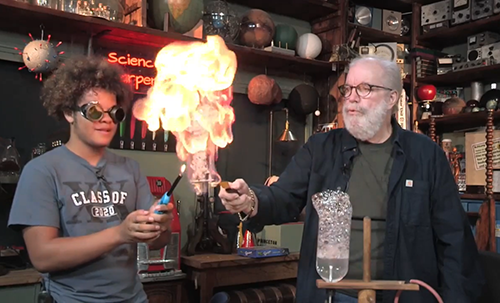 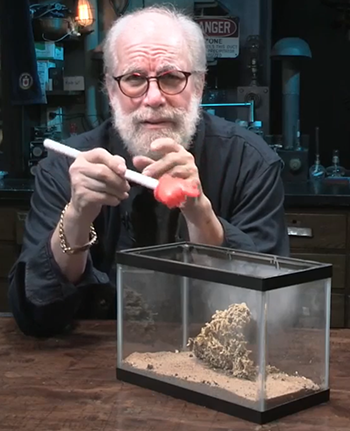 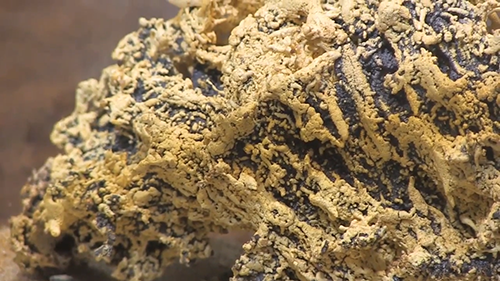